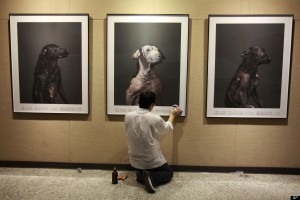 A photographer in Taiwan named Tou Ghih-kang has be recording the last moments for some dogs at the Taoyuan Animal Shelter over the last two years. Once the photo shoot is over the dog or even puppy is taken away and put down. Tou Ghih-kang has photographed over 400 dogs of which most of them were abandoned by their owners. To him the work is very distressing and is trying to spread the message to owners about taking responsibility for their pets.

“I believe something should not be told but should be felt,” says Tou, a thick-bodied 37-year-old with an air of quiet confidence. “And I hope these images will arouse the viewers to contemplate and feel for these unfortunate lives, and understand the inhumanity we the society are putting them through.”

Many pet owners in Taiwan fawn over their pets and even lavish them in stylish dog clothing and other accessories. “Animals are seen just as playthings, not to be taken seriously,” says Grace Gabriel, Asia regional director of the Massachusetts-based International Fund for Animal Welfare. For the unfortunate, they are abandoned to the streets once the initial thrill of ownership wares off.

Taiwanese authorities estimate that this year over 80,000 stray dogs will be euthanized. According to animal rights activists, 70 percent of dogs in shelters are killed after a 12 day waiting period despite efforts to find them homes and millions of cats will continue to be put down each year as well.

Tou has tried to capture the dignity and prestige of his photographed subjects. Many of his dogs are placed in poses so they almost look human. Tou uses the professional name Tou Yun-fei, and says the Taiwanese media were not paying enough attention to the dogs‘ plight. He doesn’t believe in having pets, but the problem had long plagued his conscience.

A handful of the over 40,000 dog pictures will be on exhibit in August at the Fine Arts Museum in the southern Taiwan city of Kaohsiung.  “I am a medium that through my photography, more people will be aware of this issue,” he says. “I think that’s my role.”