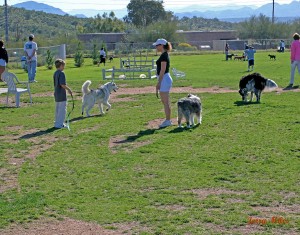 Lower Merion Township, PA – Pet owners on the Main Line outside of Philadelphia received some welcome news today when off-leash pilot programs in two parks received a green light to continue the program. Good behavior by pet owners and their pets, as well as compliance with permit requirements has demonstrated the program can be a success.

In addition, feedback from participants and staff has resulted in changes to make the permit process easier and expand the hours which are designated for off-leash activities.

Rolling Hill Park in Gladwyne and West Mill Creek Park in Penn Valley were the two parks that implemented the program in 2009, with the program expanding to Narberth Borough residents in 2010. The township built a fenced-in area for pets to roam off-leash, while some trails were designated for off-leash times as well.

While the revenue from the permits was more than sufficient to cover the expenses of administration and the physical improvements, the number of issued permits was lower than anticipated. Many suggest this was due to the requirement of vaccinations for the disease Bordatella in addition to rabies and distemper. Many owners were concerned with reactions to the vaccinations. In addition some owners complained that the off-leash hours outside the fenced-in areas were too limiting.

Some proposals under consideration before the township board include eliminating the vaccination requirements since no other programs in the country require them, and increasing the off-leash hours. They are also requesting to keep permit fees at their current levels of $25 per dog for Lower Merion residents and $35 per dog for Narberth residents.

The township will advertise the amendments for public comment as point in the future since a date has not yet been set for the hearing.