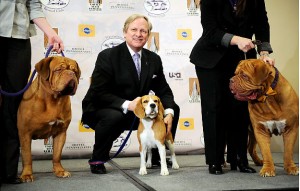 NEW YORK – The Westminster Kennel Club Dog Show celebrates its 135th year of bringing together dogs, owners, and New York for a competition that will have the place barking with excitement on February 14, 15.  With the first day of the dog show well underway, one proud and lucky pup from Upper Milford was already awarded the distinguished honor of Best of Breeds, for the third straight year!  Her name is Lola, and she’s a beautiful 15-inch Beagle.  Three year old Lola will move on to the next step tonight, the group competition.

With her tail wagging as she pranced across the show ring, Lola was at the top of her game, exhibiting more exuberance than any of her competitors.  For Lola’s owner, Marcelo Chagas, it was an emotional win.  “She loves to hit the ring and show,” which she did for thousands of spectators.  Part of what keeps Lola ready to enter the ring is the way she prepares with Chagas.  “Most of the owners keep their dogs standing for hours, but this is a hard place,” Chagas said.  Playing in the time leading up to showing relaxes both Lola and him, he explained.

This years Westminster Kennel Club Dog Show promises to be as exciting as always, with dogs, handlers, trainers and owners behind the scenes preparing their dogs for the event.  The dog show, held at Madison Square Garden, is expecting a total of 2597 dogs from 49 states, a total of 179 eligible breeds.  New this year is the addition of six now eligible to compete breeds of dogs, as decided by the American Kennel Club.  The first of the new breeds is the Boykin Spaniel, South Carolina’s state dog, followed by the Bluetick Coonhound, known for trailing raccoons.  The Redbone Coonhound is also known for its hunting abilities, but features a flashy red coat.  The Icelandic Sheepdog, the only dog native to Iceland, along with the Cane Corso and Leonberger breeds make up the 6 new additions to this years show.

The Westminster Dog Show is considered the second longest continuously held sporting event in the country.  The fact that Upper Milford dog, Lola, won for the third year in a row shows the true dedication an owner and handler must put into the training of the dog.  Lola goes on to compete in the group competition tonight, and will be available to watch on USA network both Monday and Tuesday nights, starting at 8:00pm Eastern time.