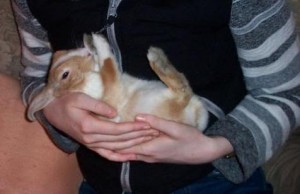 Boardman, OH – No animal is more suited to a massage than pet rabbits, the third most popular house pet behind dogs and cats.  Not only do they love them, rabbits who receive regular massages are reported to be calmer and less stressed than pet rabbits that don’t.  In honor of February being Adopt a Rescued Rabbit Month, the Petco Store on Boardman Poland Road invited volunteers to teach rabbit owners how to give massages.

Volunteers from F5RS, along with director of the small-animal rescue sanctuary, Sassy Pickard, set up shop to give demonstrations of rabbit massage techniques, as well as perform wellness exams on rabbits brought in by people who own them as pets.  F5RS stands for Frisky Ferrets, Fuzzies and Feathered Friends Rescue & Sanctuary.  As its name indicates, it also accepts ferrets and parrots.  “Believe it or not,” says Pickard, “bunnies love to have their feet massaged and they also like having their ears gently pulled during the massage, which takes about 10 minutes.”

Pickard showed visitors how to properly massage a pet rabbit, starting at the tip of the face, working slowly back across the ears, under the chin, along the spine, and finally along the bunny’s legs and feet.  Not only do the rabbits love it, other benefits of massaging rabbits include the bonding effect that happens between owner and pet.  “Because they are a prey animal, rabbits can be skittish or scared,” Pickard said.  “Massage helps calm them, and it also helps the animal bond with the owner.”

Giving a massage to your rabbit is also a good way of keeping in tune with your pet’s health.  You will be able to notice any skin changes, weird bumps, scratches, bites, in fact anything you might not normally notice about your bunny but that could need medical attention.  When you first start giving your rabbit massages, get to know your rabbit’s coat, skin, muscle tone and body.  As this continues, with every massage you’ll notice even the smallest changes so, if there is something wrong with your rabbit, you’ll see it quicker and be able to deal with it in a timely manner.

Due to the calming effect massages have on rabbits, Pickard says, “rabbits who get used to the massage eventually will allow themselves to be cradled on their back so their legs and belly can be massaged.  That also makes them easier to handle during veterinary examinations.”

Many studies now show that the benefits of massaging rabbits extend to humans as well.  People who own pets live longer than people who don’t.  Part of the reason for this, scientists think, is that pet owners get the benefits of touch that non-pet owners don’t always get.  Massaging a rabbit, which requires a lot of touch, can also lower your blood pressure and even speed up your recovery from an illness, and can also do the same for the animal.  This leads to a less stressful and healthier life for both of you.

F5RS is dedicated to providing a quality life to all healthy, sick, injured, or behaviorally unsound animals who can be helped by medical or behavioral intervention.  Consider adopting a rescued rabbit when looking for a new addition to your family.