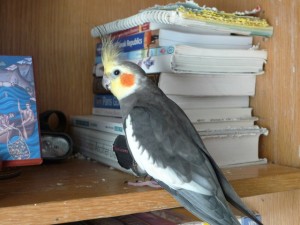 Upper West Side, NY – Owners of Josie, a pet Cockatiel, now believe in miracles due to the impossible happening.  Just before the start of Hurricane Irene, Josie was lost and thought to be missing forever.  It wasn’t until two days after the hurricane that the pet bird was found, barely hanging onto its life.  Surprising not only his owners, but the rescuers and veterinarians that took care of him, Josie survived what he would describe as a harrowing tale if he could say more than a few learned words.

What started as a routine trip to the vet on Friday, August 26, ended in disaster when not only Josie, but Cliffy, also a cockatiel, were startled and flew out of their bird carrier.  Owners, Jim DiGiovanni and John Casserly were shocked to watch as they got further and further away from them, just hours before the start of Hurricane Irene.

DiGiovanni, a 62-year-old talent manager in the music business, said “What a nightmare, it was the worst moment of my life.”  Josie had been living with the couple for 14 years, while Cliffy, age 3, had become members of the family.

In their desperate attempts to find the missing birds before the effects of the hurricane became a reality, DiGiovanni and Casserly made flyers and posted them around the area.  They were even offering a $300 reward to anyone who helped find the lost birds.

At about 10pm that night, Cliffy was found by a woman who had seen the posters.  Although he was alive when found, Cliffy did not make it through the night, having sustained too many injuries.  “That bird trusted us and we blew it,” said DiGiovanni, who was now even more determined to find missing Josie.

The search for Josie continued through Saturday, as well as Sunday when Hurricane Irene was in full effect, all to no avail.  At this point DiGiovanni and Casserly had to come to the realization that Josie could be gone for good.  “We couldn’t imagine at that point that Josie was alive,” DiGiovanni said.  “I was completely beside myself with grief.”

A long two days later, the couple received a phone call from an employee of the Central Park Conservancy, saying that a family believed they had found Josie while walking in the park, and that he was alive!  When rescuers first approached the bird, it appeared that he wasn’t responding well, however when DiGiovanni and Casserly arrived, Josie immediately recognized their voices and started chirping.

After four long days of being under emergency vet care, Josie was finally able to go home, where he continued his recovery.  During his time at the vet though, the prognosis was that Josie only had a 50-50 chance of surviving, due to being severely underweight, dehydrated, and mal-nourished.  DiGiovanni was so thankful that Josie survived, that he offered the reward of $300 to the conservancy worker, but she wouldn’t take it.  Instead, DiGiovanni became a conservancy member for life!