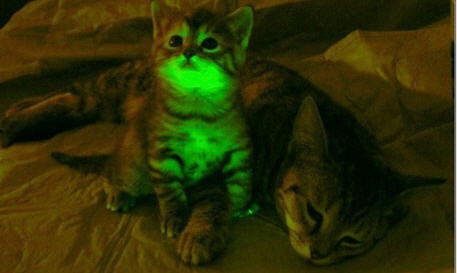 A special group of cats have helped researchers make significant strides in AIDS research, due to their ability to glow in the dark.  Yes, you read that right, these glow in the dark cats were specially engineered by a Mayo Clinic team to produce a protein that helps their bodies resist the feline immunodeficiency virus (FIV), which causes AIDS in cats.  Because FIV is so similar to HIV in humans, scientists consider the findings to be a great leap in the future of protecting humans and preventing HIV.

Details of this extraordinary research included a team of American and Japanese scientists from the Mayo Clinic College of Medicine in Rochester, Minn., and Yamaguchi University injecting an antiviral gene from a rhesus macaque monkey into the cats, as well as one that produces the fluorescent protein GFP, which allows them to glow in the dark.  The infection fighting proteins from the monkey are able to fight HIV and FIV, which was proven effective when the cats started to glow.

The scientists also discovered that this genetic protection in the cats can be passed on through generations, because the engineered cats had kittens that were also able to produce proteins that protect against virus invasion, hence they were glowing in the dark as well!

“We haven’t shown cats that are AIDS-proof,” study researcher Eric Poeschla, a molecular biologist and infectious disease specialist at the Mayo Clinic College of Medicine, said.  “We still have to do infection studies involving whole cats.  That the protection gene is expressed in the cat lymphoid organs, where AIDS virus spread and cell death mostly play out, is encouraging to us, however.”

Additional research is needed to determine if in fact a treatment and prevention of HIV in humans has been found, and with the help of this group of glow in the dark cats, those findings may not be far off!