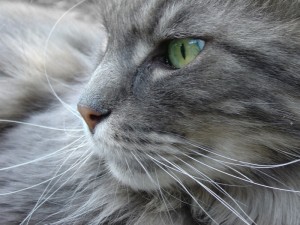 Covelo, CA – Bill Uhlig was pretty certain that he would never see his cat, “Cinderella,” again. But that didn’t stop him from trying to find her.

Uhlig, a heavy equipment mechanic, was ill with the flu at the time and decided to continue the trek home after several hours of searching. He spent several months sending out online bulletins for the missing cat, when an animal shelter in Idaho called and told him that a cat fitting the description in his bulletins was holed up in a barn outside of Aberdeen, Idaho.

He made the trip only to find an angry, hissing cat. He managed to get her home, only to discover it was not “Cinderella.” That cat escaped outside and disappeared.

“It was the exact same cat,” he said.

Fortunately, earlier this month he received another call and this time he set out for American Falls, Idaho.  “It was really Cinderella,” said Uhlig. “When I showed up to get her, she jumped right in my lap and started purring,” he said.

She had lost a great deal of weight and had broken a leg, but now she is home and healing. “You know, though, they have nine lives,” he said. Cinderella may a have used a few of them , but is no worse for the wear.