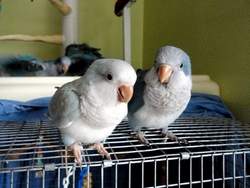 Northfield, NH – A law that has been on the books since 1998 and never been enforced is now at the heart of a major conflict between bird clubs, parakeet lovers and the State’s Fish and Game Department. Suzanne Burke of Nashua, recently learned of the obscure law that prohibits anyone in the state from transporting, selling, owning or breeding Quaker parrots, also know as Monk parrots.

When Burke learned of the law, she contacted the Fish and Game department to have the matter clarified. Burke has been breeding Quaker parrots and selling them for years. Officials at the Fish and Game Department have given Burke 30 days to get rid of the 20 parrots she owns. “I wasn’t trying to hide anything,” Burke said, adding that she had hoped Fish and Game would grant her reprieve on the 30 day requirement.

“But they are pretty adamant that the birds have to go,” Burke said. She said the fact that so few people know anything about the law and that the Fish and Game Department has not seemed to enforce it over the years should be taken into consideration going forward. “It’s been unenforceable for 13 years, it’s as good as dead to me,” Burke said of the law.

The parrots are illegal in New Hampshire because large flocks were found in Connecticut and New York nesting on power lines and in the wild. However, the birds are legal in Massachusetts, Maine and Vermont. The state’s exotic animal law, RSA 207:14, makes the Quaker or Monk parrot, which originally came from Brazil, the only species of illegal bird in the state.

David Smith of North Field is a member of the “Birds of a Feather” bird club, a statewide bird enthusiast organization. Smith said the monk parakeet is invasive only in large, wild flocks, a situation he doesn’t see happening in New Hampshire. He said since most of them are owned as indoors pets, many would have their wings clipped so that they could not fly away if they got out of their cages. “Whether one should survive if got loose … the odds are it isn’t going to live,” Smith said. “They are not the nasty birds people say they are.” He said those who own birds as pets, especially expensive ones, work to prevent their escape.

He said he had never heard of the law until Burke spoke to him about the situation. He said since Burke’s story came out, he has been contacted by several monk parakeet owners and one pet store. “The state should have notified pet stores and veterinarians when the law came out,” Smith said. Smith does not own monk parakeets but he sympathizes with Suzanne Burke’s plight.

Lt. Robert Bryant of New Hampshire Fish and Game said those who are found to have Quaker parrots are told they have get rid of the birds or the state with seize them. The violator can also face court time and up a $1,000 fine. In terms of enforcement, Bryant said they would not visit a home unless they had information that the homeowner was keeping Quaker parrots. However, he said they will be inspecting pet stores more frequently.

Burke said she wants the Fish and Game Department to show her proof, if there is any, of Quaker parrots ever creating a nuisance in New Hampshire. She added that she is also trying to find out if anyone in the state has been cited for having the birds, apart from her. “These are my pets and I’ve invested a lot in these birds,” Burke said. She estimates that all her birds, which number less than 20, are worth between $5,000 to $10,000.