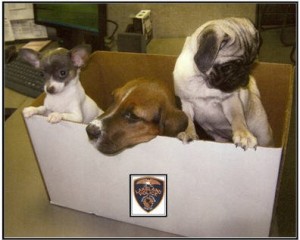 Lakeland, FL – It was quite an adventure this week for three puppies who were stolen from their home, a Petland store in the Lakeland Square Mall.  The kidnapped 8-week-old Chihuahua, Pug, and 10-week-old Bassett Hound were dropped off in Orlando, after thieves became scared.  The pups were taken in by three sisters with loving arms who found them in their neighborhood near Sea World.

The robbery happened quickly, starting with security guards noticing a green truck parked outside one of the mall entrances with its doors open and engine running.  “Next thing you know, the two suspects run out of the mall with the puppies in their arms,” said Todd Bailey, a Lakeland Police Department detective.  Over the next 48 hours, police talked with witnesses, one of which was able to get the truck’s license plate number.  Thankfully, this break in the case led police to the first of the two puppy snatchers, Samuel Alves.

The store’s general manager, Karl Rich, tells police he “locked the doors to the store at exactly 9:08 pm.”  By 9:30 pm, the robbery was in progress, with the three pups being carried away by Richard Clark, whom Alves named as his accomplice.  Bailey said police learned Clark “got scared and drove to the Deer Creek subdivision over near Sea World.”

Thursday night, Bailey and a partner on the police force went door to door in the neighborhood.  They finally arrived at the home of the Ciliberti family, where the puppies had been rescued by three sisters.  Since the discovery of the puppies, sisters Aysia, 11, Tiffany, 15 and Brittany, 18 made phone calls and put up fliers in the hopes of finding out where the puppies came from.  “They were trying to be the good Samaritan, young people we need more of in society,” Bailey said.

The puppies were taken to a vet to be checked over and were released back to Karl Rich with a clean bill of health.  Upon their arrival back at the store Rich became aware of a situation that “tugged at his heart”.  The oldest of the three sisters, Brittany, was forced to give up her puppy four years ago, who also happened to be a pug.  Because of time spent in and out of the hospital after brain surgeries, money was becoming tight.  The Ciliberti family was forced to move in with relatives, giving away their beloved dog, Honey.

In response to the finding this out, Rich packed up the recently rescued pug puppy and drove him back to Orlando, to the home of the three sisters.  The family called this surprise gift from Rich a blessing.