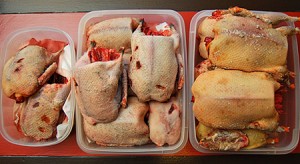 Melbourne, FL – Feeding your pets’ raw wild game, like what they would hunt in the wild, is the new trendy pet diet. But the cost of obtaining or selling these illegal tidbits of wildlife online could result in a jail time and fines. Anyone caught selling raw meat without a permit to do so can face felony charges that could result in five years in jail and a $5,000 fine. Those caught purchasing the illegally obtained meat could face up to six months in jail and a $500 fine.

As more and more people are turning to Craigslist and Ebay asking to buy rabbits, squirrels, ducks and many other wild game animals to feed their cats or dogs the demand goes up. Investigators in the Fish and Wildlife Internet Crimes Unit have seen more people looking to obtain the raw animals, although no Floridian has gone to jail yet for trying to buy illegally obtained raw game meat online.

The Florida Fish and Wildlife’s Internet Crimes made 177 arrests and gave out 92 warnings in 2010 for cases involving the buying and selling of illegal wildlife raw meat online and some of it was for pets. “It’s happening nationwide,” said Lt. George Wilson, head of the Internet Crimes Unit. “The philosophy behind it is feeding your pet a hormone-free, naturally grazed diet. “We’re seeing solicitations for wild ducks, anything wild.”

The market for raw game to feed your pet is still relatively small and so can be tough to obtain. The internet has provided a means for individuals to buy-pass costly taxes, inspections and licensing. Some pet owners have turned to this fad diet for their pets because of the tainted and toxic melamine pet food that was imported from China in 2007. Whatever is driving the demand for raw wildlife meat is also creating a problem for law enforcement.

“Those that are unknowledgeable, we’re trying to educate them,” Wilson said. But these Internet outlaws skirt regulations that ensure meat is sanitary and comes from game hunted in-season. They threaten to create black markets for wildlife similar to what existed for alligators 50 years ago, Wilson said.

So far, all incidents in which people were buying illegally obtained raw game for their pets in Florida have only been given warnings, Wilson said. That won’t last forever. “They’re very well meaning,” he said of pet owners who aspire to the prey model diet. “Our interest here is to protect our natural resources. If this is allowed to go unchecked, it could create a black market that would impact the populations of wildlife in Florida.”