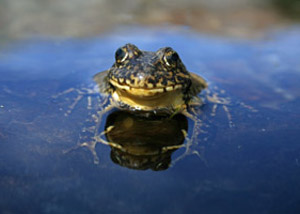 San Francisco, CA – For almost a decade there many types of amphibians including the mountain yellow-legged frog of Southern California have been protected under the endangered species act by the U.S. Fish and Wildlife Services. “If the government is serious about its legal responsibility to save these rare frogs and salamanders in California, it needs to stop dragging its feet and get to work on developing a roadmap for their recovery,” said Collette Adkins Giese, the Center’s herpetofauna attorney. “Every day without a recovery plan is a day these species are left without the help they badly need.”

Because of the dire need for a plan to rescue these frogs from becoming extinct the Center for Biological Diversity, a non-profit conservation organization, has filed a formal notice to the Interior Department, which oversees the U.S. Fish and Wildlife Services, of its intent to sue in order to force the agency to develop the required recovery plan for the frogs. The main reason for the frogs decline according to Center was the California Department of Fish and Game’s introduction of nonnative trout to high alpine lakes.

The mountain yellow-legged frogs are adapted to high-elevation habitats without aquatic predators. It occupies rocky and shaded streams with cool waters that are created by underground springs and the melting of snow.  According to the Press-Enterprise records only about 200 adult frogs remain in the San Bernardino, San Jacinto and San Gabriel mountains where they once had an abundance of these frogs.

Recovery plans are necessary for identifying the steps to be taken that are necessary to save endangered species and have them removed from protected status. The Center reports that those species with a plan that is implemented for two or more years have a better chance of improving their recovery then those with no plan.

The suit is not only for the mountain yellow-legged frog but the California tiger salamander as well. “Exotic predators and habitat destruction are pushing California tiger salamanders and Southern California mountain yellow-legged frogs to the brink of extinction,” said Adkins Giese. “These animals have been on the endangered species list for about a decade and are still in trouble. The Service must act quickly to develop and implement plans to ensure that we are taking all steps necessary for their survival and recovery.”