Home Breed News Dogs The White German Shepherd: Is it a Recognized Breed? 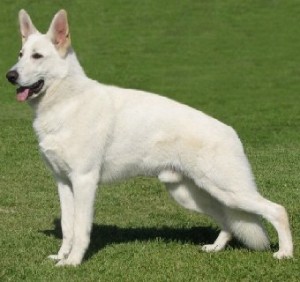 Apart from the obvious difference in color, the White German Shepherd’s are basically the same as their counterparts; they have the same build, form, and personality.  They are generally just as loving, protective, and loyal as the others.  They possess an athletic build that makes them excellent sport dogs, and they are very easy to train, which is why they are used as military and disability dogs.  Contrary to other breeds, these dogs exhibit a pleasant temperament, which makes them a great addition to a family or a friend for the disabled. Many White German Shepherd owners state that their dogs tend to be more mellow than other German Shepherds.

Similar to all the other German Shepherd breeds, the White line also requires a lot of exercise to stay healthy.  They are very active physically and need the proper time to run around in a wide open area.  Otherwise, they do not require a lot of special treatment, though it is recommended to provide them with a well-balanced diet and regular grooming.  This breed tends to be quite vocal and communicates with you through barks, whines, and mumbles.

White German Shepherds are vulnerable to a great deal of hereditary health issues just like the other dogs of this breed, and they are especially at risk for elbow and hip dysplasia, though it is preventable as well as treatable.  Other common ailments they are at risk for are dwarfism, epilepsy, and keratitis, also known as cloudy eye.

So how did the White line become a new introduction to the world of German Shepherds?  The Europeans sought out to create this new breed with the intention of making them stronger with more enhanced traits.  The new breed carried a recessive gene for coloration that was different from the regular German Shepherds, making them white.  Because of the color change, Germany’s official German Shepherd dog club refused to recognize it as an official breed, leading other countries to soon to the same.

Overall, the White German Shepherds are not different from their colored counterparts except for the fact that they are white.  They are just as good at search and rescue, being guide dogs, and tracking.