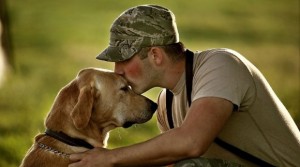 San Antonio, TX (Photo Credit: Bryce Harper, New York Times) – Of the approximately 650 military dogs deployed with American combat forces, nearly five percent are coming down with symptoms of PTSD (post-traumatic stress syndrome). Used to hunt down the enemy, clear buildings of bad guys, and sniff out non-metallic mines, these furry warriors are under the same duress as their human counterparts in the battle field.

Canine PTSD has only been a diagnosis being used by military veterinarians for about 18 months, but it accurately describes the behavior exhibited by the dogs after exposure to gunfire, explosions, and other combat scenarios in the theatre of Iraq and Afghanistan.

Dr. Walter F. Burghardt Jr., chief of behavioral medicine at the Daniel E. Holland Military Working Dog Hospital at Lackland Air Force Base, describes behavior that can differ between different dogs, yet generally results in the same outcomes. Some become clingy or aggressive, refuse to enter areas where they had been comfortable before, or become hyper-vigilent, setting off false alarms regularly. “If the dog is trained to find improvised explosives and it looks like it’s working, but isn’t, it’s not just the dog that’s at risk,” Dr. Burghardt said. “This is a human health issue as well.”

The number of working dogs on active duty has risen to 2,700, from 1,800 in 2001, and the training school headquartered at Lackland AFB prepares about 500 dogs a year. The Holland hospital, the Pentagon’s canine version of Walter Reed Army Medical Center, has also gotten busy. They continuously conduct consultations to the military veterinarians in the field, working through potential canine PTSD cases.

Care can start with taking a dog off patrol. Then he advises to give lots of exercise, play time and gentle obedience training.

More serious cases will receive what Dr. Burghardt calls “desensitization counter-conditioning,” which entails exposing the dog at a safe distance to a sight or sound that might trigger a reaction — a gunshot, a loud bang or a vehicle, for instance. If the dog does not react, it is rewarded, and the trigger — “the spider in a glass box,” Dr. Burghardt calls it — is moved progressively closer until the dog is comfortable with it.

Some dogs are treated with medications similar to what humans receive, such as Xanax, which allows the dog to ease back into working condition.

There is very little research in the field, and many veterinarians are reluctant to use medications since there is still many things to learn about how they effective they are in humans. However, many agree that this is a real category of pet mental health that needs further investigation.

There is debate on whether dogs can be cured of PTSD, so owners with dogs exhibiting these signs are encouraged to look to management options – and offer lots of patience.