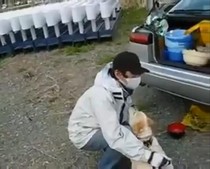 Fukushima, Japan – The Environmental Ministry of Japan along with the Fukushima prefectural  government announced today that private animal protection groups will be allowed into the 20 kilometer no-go zone for around five hours to rescue pets. These animals have been struggling to survive since the March 11th nuclear disaster at the nearby Fukushima Daiichi nuclear power plant caused by a tsunami.

Those wishing to rescue any pets in the zone must receive an official permit from Fukushima officials which is issued only after they can prove that the pets’ owners have asked them to rescue their animals. They must be able to shelter the animals once found and show plans in advance that they have secured adequate shelters. Many residents are concerned that their pets will not be found in the slim five hour time frame. The permits will expire on December 25th.

Immediately following the nuclear disaster, residents and rescuers were allowed into the no-go zone, at their own risk, to care for the animals but were not allowed to bring them out.

The animals have been on their own for so long they are hungry, terrified and many are believed injured. As a result of being left alone and unsterilized, many are breeding out of control which makes the situation worse for all the animals.

Animal rights groups have been outraged at the Japanese Government for their lack of cooperation with efforts to rescue the trapped animals after the devastation. Despite mounting international pressure, the Japanese Government has been unwilling and in some cases hindered rescue efforts. Residents continue to beg the Government to allow rescue groups to enter the no-go zone to retrieve their pets.

You can follow the rescue events as they unfold in the Fukushima exclusion Zone on the Hachiko Coalition Facebook page.  Donations are being asked for by rescuers to help pay for food, medicine and to shelter the recued animals.