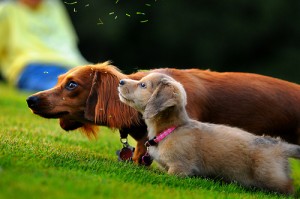 Slaughter, LA – You might want to test your surroundings overhead by using a stuffed animal as a decoy if you live in Slaughter, LA and have pets you hold dear.  Avid dog lover and grandmother, Pat Bringol, who’s always enjoyed living in the country, heroically wrestled her 10 pound miniature dachshund away from the fierce grip of a hawk’s talons last Wednesday.  She’s now questioning whether the clean air and other benefits of living in the country are worth it!

Out for her daily routine in her familiar backyard, “Hannah Marie” became the desire of a hawk, reportedly seen in the neighborhood for the past week.  “He’s been in the trees and around our property,” said Bringol.  “And, he’s been around the neighborhood.  Our neighbors have seen him.  He’s even been on our carport.  And, that’s…scary.”  Although pet owner, Jan, was taking every precaution to keep her furry friend from becoming the hawk’s lunch, the hawk had a different idea in mind.

While “Hannah Marie” was enjoying the sun in one of her favorite spots in the yard, “the hawk just ‘just swooped down above her’ and picked her up”, said Bringol.  “I had to reach on my tippy-toes and grab her hind legs.  And, it took everything I had to pull her.  I said, ‘You’re not getting my dog!’ I was so mad I was shaking,” she continued.

Again, no animals (or humans) were harmed during this strange episode, with only Hanna Marie’s pink jacket to prove the event even happened.  Three gashes in the jacket were caused by Bringol pulling the dog out of the hawk’s grasp, bringing her pet to safety.

Hawks are by nature, keen-eyed and avid hunters, always searching for prey while circling above the trees.  They often perch on telephone poles and take advantage of the open spaces along the roadside to spot and capture mice, squirrels, rabbits, reptiles, or other prey.  In areas where hawks have been sighted, pet owners need to take extra caution when allowing the pet to wander outdoors, and small pets should not be left alone.

This video appeared on America’s Home Videos, and is a great example of how quick a hawk actually is!