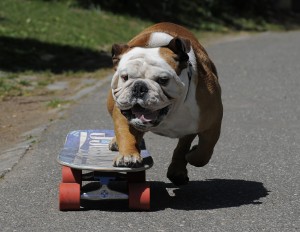 A viral video is a video that has become inexplicably popular, so popular that is shared by friends around the world to a degree that is not related to its relevance or even intelligence. The perfect example of a viral video is Psy’s “Gangnam Style”. It was such a huge hit that it has been viewed on YouTube over 1.35 billion times. It has also inspired thousands of imitations and mock-ups. While it is hard to pin down what makes something go viral, one common component is animals doing crazy things. For example, one of the latest funny animal videos which has gone viral features goats making noises that sound exactly like human beings screaming.  In just a few weeks, it has garnered over seven million views and spawned at least one imitator that did a mashup of the goats and Taylor Swift.

Why goats that sound like people has captured everyone’s imagination is anyone’s guess. While the video is funny, it is really just a compilation of footage of goats screaming. The goats are certainly not the first animal to capture the online population’s attention and they have a long way to go before they reach the heights that some dogs, cats and pandas have reached.

Funny and amazing are words often used to describe videos that go viral. Cute does it too but funny seems to be a key aspect of the viral phenomenon. If it was just a matter of being impressive than Zoe, the border collie that does some truly phenomenal tricks, would have gone viral by now. Instead, after almost a month of viewing Zoe has only garnished 268,000 views. This is still a decent showing but not in the same league as the goats.

In ascending order, here are some of the animal kingdom’s biggest YouTube hits.

5. The Skateboarding Bulldog: over 20 million views

4. The Stalking Cat: over 38 million views

3. The Surprised Kitten: over 68 million views

2. The Husky That Says I Love You: over 81 million views

The skateboarding bulldog isn’t particularly funny but the rest are almost guaranteed to get at least a giggle out of most people. The mother panda’s reaction to her baby’s sneeze is most likely to have you ROFLMAO, as they say online. Will the goats reach the same degree of fame? Only time will tell. For now, if you need a cheer-up check out one of the above or, if you haven’t already seen them, go see the goats. Just close your office door first so you don’t have to explain why you are laughing to your colleagues.

5 Tips for Gaining Rent Approval with a Pet

In the Art of Dancing, Animals Take Top Spot