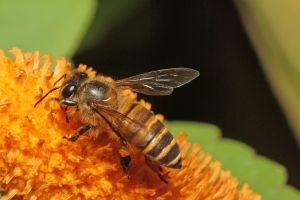 With the longtime success of dance competitions including “So You Think You Can Dance” and “Dancing With the Stars,” it’s no doubt that we love dancing … even if we’re not very good at it. But we’re not the only ones with an affinity for dancing – animals take to it as well, and often for the same reasons.

Walk into any dance club and you’ll find men and women shaking their stuff, and while many people do it just for the love of the music and movement, ingrained in our DNA is the belief that dancing shows off for potential mates. Animals, too, believe if they got moves like Jagger, they could win over a mate. Here are just some of the many animals who probably dance better than most of us.

Moonwalking with the Red-Capped Manakin Bird – There is nothing better than a dance-off, and the red-capped manakin is king of the competition. Male manakins gather around a makeshift stage where they engage in leks, or courtship displays. They’ll actually moonwalk, pivot, and add some sound effects to impress the ladies. This video shows all the crazy, lightning fast moves of the manakin, but if you’re pressed for time and want to see the famous moonwalk (not to mention the dance moves of the host), fast-forward to 2:50. You’ll never have seen anything like it.

Voguing (or Air Traffic Control) with the Peacock Spider – The peacock spider is an anomaly in and of itself – it’s as ugly … I mean, unique looking … as any spider, but comes equipped with a slew of cool colors on its rear end to attract a mate. Born as an obvious mate magnet, the peacock spider doesn’t rely solely on his good looks. he puts on a show that combines arm movements like he’s voguing, or directing traffic, while spreading out his colored fan abdomen to make sure his audience knows he’s got the goods.

The Superb Bird-of-Paradise as a Masquerade Party – Birds-of-Paradise all have their unique dancing skills, each equally as beautiful and strange as the next. But the aptly named Superb Bird-of-Paradise perhaps has the strangest of all dance rituals. As much as we love to dance, being able to dance while dressed up in a costume adds a whole new layer of fun, and the SBP knows how to do it right. I’m not sure if it’s strange, scary, or alluring (as it’s intended to be), but it sure is unexpected. One moment there’s a bird – the next moment, you have some unearthly creature stomping around like a character in Super Mario Brothers.

Bees and the Universal Language of Dance – Alright, so not every animal dances in the hopes of winning over a mate. Some animals dance in order to get their message across. Take the honey bee, for example. Honey bees shake their booties to let their group know they’ve found some pollen. Their type of movement will help direct their group to the exact location.

I don’t think Michael Jackson (or his choreographer, actually) stole his idea for moonwalking from an animal like the manakin. But it goes to show that we don’t always have the bright ideas. We’re not always the originator of a fad. We’re not the only ones who know how to wow an audience with a few moves and fancy costumes. Animals have been doing it for thousands of years. In comparison, we’re just new kids on the block.