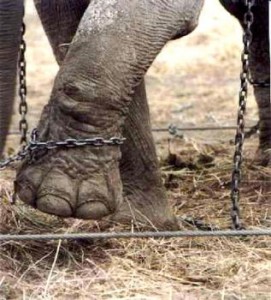 We all know that circus animal abuse once existed and was, in fact, quite a regular affair. But is it possible that this type of abuse still exists?

Last month, music mogul Russell Simmons took to the web to proclaim his unhappiness with UniverSoul Circus’ decision to hire Hugo Liebel. UniverSoul Circus is one of the most popular circus group in the country. Liebel’s Family Circus (based in Florida) has a long history with USDA violations. In 2005 the circus was fined by the USDA for multiple violations of the federal Animal Welfare Act, including failure to provide adequate space and a veterinary care for animals, particularly with an elephant named Nosey.

PETA has been on Liebel’s case for years, proclaiming that Nosey the elephant has been abused at the hands of Liebel. They cite a 2004 incident, in which the elephant pushed a circus worker, as demonstration that the elephant was stressed from repeated abuse. Liebel claimed that the incident was the result of an untrained worker approaching Nosey inappropriately.

Regardless, incidents like this, while not as rampant as decades ago, still exist.

In England, an elephant was rescued by Longleat’s Safari Park after undercover video footage shot by activists exposed abuse that Anne the elephant suffered abuse at the hands of animal keepers at the Bobby Roberts Super Circus. This included Anne being beaten by a pitchfork while chained to the floor.

Undercover video footage is at the heart of capturing circus animal abuse. Humanity Through Education claims that it’s been gathering evidence over the past 10 years to refute the famed Ringling Bros. and Barnum & Bailey Circus claim that animal abuse practices are a thing of the past.

In fact, in a 2011 lawsuit, the USDA accused the circus of violating the Animal Welfare Act over a four-year period. The circus denied the accusations but agreed to settle the case.

Wherever circuses like Ringling Bros. go, protesters are sure to follow, claiming that animals such as elephants are beaten during training and kept in confined spaces at odds with the animals’ natural habitat. There is an entire website dedicated toward evidence that Ringling Bros. mistreats its animals, including a video of a trainer whipping elephants on the head and body moments before a show. The site also provides readers with a detailed infographic on elephant abuse in circuses.

Bob Barker has teamed up with Animal Defenders International (ADI) to urge event organizers from ending the use of elephants at public events. Barker narrates a DVD titled ‘No Fun For Elephants’ that shows examples of elephant abuse in the US and across the globe.

“To many, it looks like harmless fun, but elephants pay a heavy price for the few minutes of entertainment they provide when performing in circus shows giving rides, or making appearance at parades, weddings or other events,” Barker says in the DVD.

Often times, reports of circus animal abuse becomes a “he said, she said” affair, unless there is irrefutable video evidence. Most circus officials claim that incidents of animal abuse are rare and isolated, however, as more and more videos are leaked on the web, it’s difficult not to second-guess that claim.