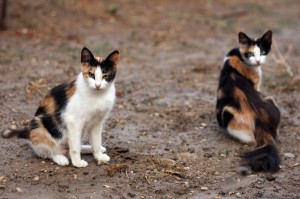 The feline’s sharp hunting instinct made them an invaluable companion animal for thousands of years. The ancient Egyptians even revered them as gods. They kept pests away, which made food storage more effective and reduced the spread of disease. Cats still make great companions for people in modern society, but their increasing population is a grave threat to wildlife that are already suffering from the expansion of cities and towns.

In fact, the authors of a recent study published in Nature Communications estimate that domestic cats kill over 1.4 billion birds and 6 billion mammals every year, according to the abstract. Feral and ownerless cats account for most of the bloodshed, but pet felines are part of the problem.

Is it really that bad?

There’s no doubt that cats are a threat to local wildlife, but it’s tough to make a proper estimate of the number of animals killed by cats, according to The Humane Society of the United States. Humane Society president and CEO Wayne Pacelle released a statement in response to the study shortly after its publication.

“There is a legitimate issue with free-roaming cats preying on birds and other wildlife, and we are working to change that in a meaningful way,” Pacelle said. “Despite the scientific rigor with which this report was prepared, like others recently published, it tries to attach a number to something that is almost impossible to credibly quantify.”

While there is a great deal of uncertainty in the study’s models, even the lowest estimates are pretty frightening. Whether cats kill 6.9 or 20.7 billion mammals annually, that is still far too many. Felines can decimate local rodent and bird populations, which can have a domino effect on other organisms in the ecosystem.

While Pacelle acknowledges the danger cats pose to wildlife, he also points out how integral cats are throughout the United States. Forcing people to give up their cats isn’t a practical solution in a country that keeps over 80 million pet cats.

“Cats are an important part of our lives, and whether owned or free-roaming, are loved and cared for by millions of Americans who celebrate the human-animal bond,” Pacelle said in the statement. “The best way we as a society can reduce impacts on wildlife from cats is to spay and neuter our pets and keep them indoors.”

The idea of getting rid of cats completely isn’t completely alien. Gareth Morgan, a high-profile economist in New Zealand, is spearheading a campaign called “Cats to Go” that aims to reduce the domestic cat population in the island nation through voluntary participation.

Keeping pet cats indoors is only part of the solution though, because free-roaming kitties are the ones doing most of the killing. The Humane Society doesn’t encourage harming wild cats, even if they pose an ecological threat. Instead, interested individuals can volunteer with a variety of organizations to trap and spay or neuter wild kitties.

“The outdated strategy of trapping and killing feral cats is generally ineffective, since it doesn’t address the sources of the problem,” Pacelle said. “Moreover, if that were the only alternative, we’d lose overnight the enormous investments in cat management made by TNR practitioners and cat lovers, since they would never participate in a round-up and kill approach.”