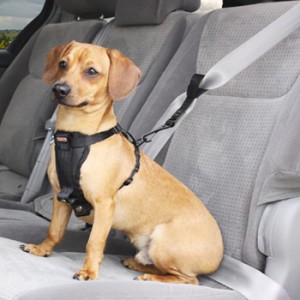 When you take your pet on a trip in your vehicle, do you put him in a seatbelt?  Most people don’t, but according to experts, dogs and cats should be buckled-up for safety just as humans should.  Pet travel has increased 300 percent since 2005, according to Bark Buckle Up, a pet safety advocacy organization, while the use of pet restraints is only about 2 percent.

Take the story of Leslie May, who was traveling along with her shelties from Dayton, Ohio, to Indianapolis.  She started to see brake lights up ahead and in order to keep from getting rear ended had to swerve out of the way.  She ended up hitting the car in front of her and if it wasn’t for the restraints she had on her dogs, who knows what would have happened.  The possibility of them getting seriously hurt or even killed was avoided because of the prevention she took to keep them safe in the car.

According to Christina Selter, founder of Bark Buckle Up, there are three reasons why it is so important to use restraints on pets while traveling:

There are a variety of ways to restrain dogs while traveling in a vehicle from types of harnesses, the use of crates, and actual seat belts made specifically for pets.  The website, www.petautosafety.com, provides a variety of dog car seat belts that offer the protection every traveling dog should have.

Take a look at this video to find out how to put on the dog car harness:

Every pet owner is encouraged to have some sort of restraint system in place when traveling with your dogs or cats, both for the safety of them as well as you and other passengers.