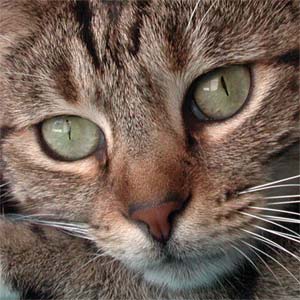 Charleston, SC – Remember the movie, Homeward Bound, where the two dogs and a cat were trying desperately go get home to their owners who thought they were lost forever?  Well it’s a similar story with Spencer, an 11 year-old gray, determined cat, one of four furry friends of owner Ann Laubacker.  What started out as a simple journey from Florida to New York quickly turned into a disaster.  Laubacker was driving her camper home with her 88 year-old  mother, her dog (a Pomeranian), and her four cats when tragedy struck.

On a stretch of Intersate 95 near Harleyville in South Carolina, Laubacker lost control of her camper home, causing it to topple onto its side, skid off the highway, and actually tear open.  The entire collection of Laubacker, mother, dog and three of the four cats turned out to be perfectly fine, with the exception of the now lost cat, Spencer.  Laubacker assumed at this point that Spencer had fled into the woods and after trying to recover him for quite some time, she realized it was hopeless – Spencer was nowhere to be found.  The family, once recovered from the accident in the camper home, flew the rest of the way back to New York, where they were then mourning the loss of Spencer.

As luck and good news would have it, a week later, an insurance adjuster visited the wrecked camper to access the damage.  Terry Walters quickly discovered that in the back of the camper, crouched between a wall and some duct work, was a camped-out gray cat, who happened to answer to the name Spencer!  For the entire week after the crash, Spencer stayed close to where he last saw his owners, probably in the hopes that someone would come back to find him.

Later that afternoon, Walters took Spencer to the Charleston Animal Society, where veterinarian Brittany Tisa found the cat to be in relatively good health, although severely dehydrated.  Within a few hours, Spencer was his old self again, with liver and kidney functions becoming normal.  At that point Spencer was allowed to go home and be re-united with owner Ann Laubacker.  Laubacker was truly amazed at the whole situation, and in a phone interview with he Post and Courier of Charleston she said, “I’m shocked.  I’m so blessed that he has a guardian angel.  I just assumed he had dropped out or run into the woods.”

It was a wonderful day for Spencer when Walters found him among the camper wreckage.  That does go to show that when you get lost, you should stay in the last place someone saw you for the best chance of being found.  Turns out Spencer was a pretty smart cat!