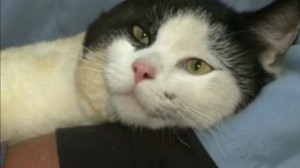 We need your help to find the owner of this cat. From the Dayton Daily News:

“A male cat that survived a four-hour, 200-mile ride under the hood of a car Sunday now needs help finding his owner.

Wayne Polk of Xenia left his home about 4 p.m. Sunday driving to Cleveland, according to WJW-TV. Polk was stopped at a rest area on Interstate 71 in Medina when he smelled something coming from his car, a Mitsubishi Eclipse.

Ohio State Patrol Trooper Aleksander Tot said he also stopped when he found Polk’s vehicle hood up where a large black and white cat was stuck in the engine compartment.

“I was patrolling the northbound rest area on Interstate 71, and I approached a parking area, and there was a gentleman there with his hood open, and he had a cat stuck in the engine,” Tot said. “The cat was pretty calm, seemed really scared, and he had burns on his right side.”

The cat was taken to Cloverleaf Animal Hospital in Lodi where Dr. Linda Randall said he was going to be fine. He remains in the hospital and underwent surgery Thursday to remove burnt tissue, said Stephanie Moore, executive director of the Medina County SPCA.

Randall is calling him “Eclipse” because that was the model of Polk’s car. Moore said the cat is about 2 years old and an unneutered male.

Moore said her agency is trying to find the feline’s owner and is corresponding with Greene County Animal Control. She said the goal is to reunite the cat with its owner. If that does not happen, he will be placed for adoption.

“We’ve got people calling who want to adopt him,” Moore said.

Anyone with information about the cat can call Moore at (330) 723-7722. For more information, visit the agency’s Facebook page, Medina-County-SPCA.”

Spread the word and let’s see if we can get this kitty home for Christmas!