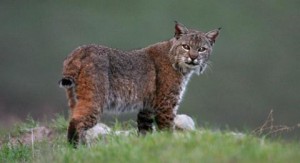 DALLAS, Pa., Nov. 16, 2012 – A cat may not have nine lives, but a young bobcat in the Poconos received a second one recently, according to Pennsylvania Game Commission officials.

A female bobcat kitten was discovered in a wooded area of Luzerne County this past spring by a couple hiking in the woods. The seven-week old cat was found weak and unable to walk, and without any adult female seen in the vicinity. The situation remained unchanged the following day, and arrangements were made to deliver the bobcat to the Pocono Wildlife Rehabilitation Center near Saylorsburg, Monroe County for medical care and rehabilitation. The Pocono Wildlife Rehabilitation Center is licensed for wildlife care through permitting by the Game Commission, U.S. Fish and Wildlife Service and U.S. Department of Agriculture.

“Bobcats are sometimes hit on the roadway, or die from disease or a variety of other causes,” Wenner explained.  It would be rare to have a female cat abandon her young.”

When the bobcat arrived at the rehabilitation center it weighed about 1.5 pounds and was in poor physical condition, according to Kathy Uhler, Pocono Wildlife Rehabilitation Center director.

“It was provided an initial diet of specialized formula, and then weaned to a diet of small mammals and birds including rabbits, pigeons, rats and mice,” Uhler said. “Animals were fed to the cat alive when possible. While this may sound distasteful to some, it is necessary in order to stimulate natural hunting behavior.

“The cat was housed in a secure enclosure with double doors to prevent escape and human contact was kept to an absolute minimum in an effort to discourage imprinting.”

When it was time for the release, Wenner approached the enclosure quietly and cautiously, as a group of students from East Stroudsburg University and reporters from the local media looked on.

“The cat seemed to sense something was amiss and it let out a low, guttural growl,” Wenner said. “The cat was positioned high on a rafter as Eric Uhler, who is largely responsible for the daily care of the animal, and I entered the innermost door. We were greeted with menacing bared teeth and hissing, as the young cat swiped at the air from above.

“The tranquilizer dart, containing a mixture of animal immobilization drug, found its mark in the cat’s shoulder, and soon made handling the animal possible. The bobcat was taken outside and a scale showed its weight at a healthy 14 pounds.”

East Stroudsburg University students obtained hair samples to determine its genetic profile, as part of an ongoing study, and then the bobcat was transported in a pet carrier to a remote section of State Game Land 186 in Monroe County.

“The habitat there makes it an ideal release site,” said Wenner.  “It provides plenty of food and cover to meet the animal’s needs. The hunting and other survival behaviors of bobcats are largely instinctive, and this cat has a good chance to make it.”

The pet carrier door was opened carefully and the young cat got a first glimpse of her new surroundings.  It was an environment free of human sounds and manmade materials.  The cat, still groggy from the day’s ordeal, slowly regained the use of her legs and made some initial tentative steps.  A few moments later, the cat had some distance between her and a few observers, and then slowly dissolved into the woods.

“Not all wildlife found in similar situations are candidates for rehabilitation and young animals left vulnerable to predation, the elements, and starvation don’t often make it, which is a hard fact of nature,” Wenner said. “Returning this apex predator to the wild was a unique and successful operation made possible by efforts of the Pocono Wildlife Rehabilitation Center, the Game Commission, and a host of wildlife volunteers.”

Bobcats are Pennsylvania’s only feline predator and inhabit wooded areas where they feed on a variety of small animals including mice, chipmunks, squirrels, birds, and rabbits. They are highly secretive in nature and mostly nocturnal.

“Bobcats are fascinating animals and they are an important component of Pennsylvania’s diverse wildlife community,” Wenner said. “They keep prey species populations in balance and also provide sportsmen with valuable hunting and trapping opportunities.”

Bobcats in Pennsylvania have gray-brown fur with dark spots and bars, which are especially noticeable on the legs. A ruff of fur extends out and downward from the ears.

Bobcats are efficient predators, and equipped with sharp senses of sight, smell and hearing.  They have four large canine teeth to pierce deeply into prey; behind the canines are sharp cutting teeth.  Five retractable, hooked claws on each front foot and four on the rear, add to the cat’s arsenal.

Although a bobcat is a fierce fighter, it isn’t a large animal. A mature bobcat averages 36 inches in length, which includes a stubby tail. This “bobbed” tail gives the cat its name. Adult bobcats weigh between 15 and 20 pounds; with large individuals weighing as much as 35 pounds. Some may live up to 15 years of age in the wild, and much longer in captivity. Because of their secretive nature, bobcats rarely interact with domestic pets or livestock.

Bobcat kittens are born in early spring, with litter sizes ranging from one to four. Adult female bobcats guard their young carefully as an adult male bobcat may try to kill and eat the young. This behavior makes the discovery of the kitten from Luzerne County highly unusual.

For more information about bobcats, visit the Game Commission’s website (www.pgc.state.pa.us), put your cursor on “HUNT/TRAP,” then click on “Trapping & Furbearers” in the drop-down menu listing and then click on “Bobcat.”

To Connect with Wildlife, visit the Game Commission at the following: