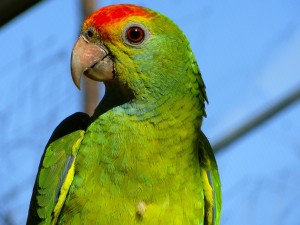 Has your exotic pet outgrown your home? One Florida zoo has a solution

Florida is a haven for exotic pet owners. Maybe it’s the warm weather? Regardless, many Floridians are the proud owners of exotic animals such as Burmese pythons, parrots, and monkeys.

The problem is, many of these Floridians (and exotic pet owners across the globe) fail to take into consideration the challenges that come with being an exotic pet owner. Most exotic pets have special diets; many (if not most) have a strong inclination to be in the wild, thus they become agitated and aggressive when we attempt to domesticate them. Some exotic animals simply outgrow our homes.

So, what happens when you can’t care for your exotic pet any longer? Well, if you’re from Florida, all too often you just let the animal out in the wild, assuming it can fend for itself. Yes, it can fend for itself … sometimes. But even in those rare occasions when your exotic pet is able to survive in a world it has no business being in, other problems arise, including introducing an invasive species to the ecosystem.

Florida officials have made no secret of the fact that their state is overrun with invasive snakes, a direct result of exotic pet owners releasing their snakes into the wild.

Zoo Miami wants to stop this. On Saturday, April 13, the zoo opened up its doors to exotic pet owners looking to find a new home for their snakes, monkeys, parrots and other animals. They called it Pet Amnesty Day. Not only does Pet Amnesty Day potentially reduce the number of invasive species infiltrating South Florida, but it also saves these exotic pet owners from any legal trouble: it is illegal to release nonnative species in Florida, and these pet owners were allowed to drop off their healthy animals, no questions asked.

While Zoo Miami expected having to house some of these exotic pets, they also compiled a number of pre-qualified adopters who would care for these pets.

Certainly Zoo Miami’s intentions are pure, but one question to come from this Pet Amnesty Day event is: can this be a viable solution for the rampant nonnative species problem Florida faces (more than 500 nonnative species are in Florida, with nearly 150 actively reproducing), or does this just give careless owners a way out once they get in over their head?

It’s not fair to group all exotic pet owners into one category. There are, in fact, quite a number of responsible exotic pet owners out there. However, many times someone gets an exotic pet as a reaction to some type of fad. For example, in the 1980s, guess what type of animal became popular here? Give up? Try turtles (Teenage Mutant Ninja Turtles).

All animals are cute and cuddly when they’re young. But these animals typically grow up to become aggressive and dangerous. While some exotic pets have been bred in captivity, many have literally been plucked out of their natural habitat. No wonder they have a hard time adapting!

With the Internet came a boom in the exotic pet trade. The Humane Society of the United States claims that the US exotic pet trade is a $15 billion business. Exotic animals are imported here to be more than just pets … they are often used in circuses and makeshift (roadside) zoos.

There are many federal regulations regarding the sale and transfer of exotic pets. Yet each year these exotic pets make their way into our borders. A Pet Amnesty Day may not address the issue at the root, but it at least does something to hopefully save the fragile ecosystem of Florida.