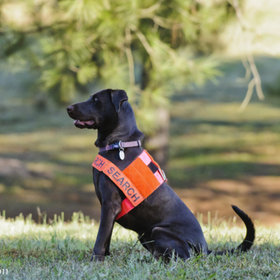 Would you want your loved one’s remains to be used to train cadaver dogs?

This story takes the term “organ donor” to an entirely new (and offensive) level. Roger Dunn was 32 when he died in a car crash earlier this month in Cambria, New York. That sudden tragedy is enough to shake any parents to their core, however, what came next was likely beyond anything the Dunns were able to handle.

Niagara County Coroner Russell Jackman gave some of Roger Dunn’s tissue to a volunteer fire chief who was training a dog to sniff out human remains.

Sure, training a dog to do that is a great service to society, but is it okay for the remains of a loved one to be used for this training without permission?

The law doesn’t think so. Both men later resigned and pleaded guilty to misdemeanors, which came with a $1,000 fine each, and 100 hours of community service with the Society for the Prevention of Cruelty to Animals.

Of course this brings up a question: How are cadaver dogs trained? Don’t they need dead bodies to be effective cadaver dogs?

While many cadaver dogs are trained using any mammalian meat or blood, many training facilities use special chemicals (pseudo-scents) that can simulate  the smell of decomposing flesh. However, when you’re trying to train a dog to discern human remains from, say, a dead squirrel, or when you want your dog to be certain of a “positive hit” in a disaster zone, a large number of folks proclaim that you have to use human remains. It’s as simple as that. Pseudo-scents, which were created less than two decades ago, aren’t as desirable as the “real thing.” In fact, Cadaverdog.com has stated that dogs who were trained using real human tissue will ignore the pseudo-scent, meaning that psuedo-scents are not as good as the real thing.

In response to this episode, Niagara County Sheriff James Voutour stated that cadavers are used to train dogs, but that there is a legal means to obtain cadaver parts. The gentlemen in this instance did not follow those legal means.

Can your deceased loved one become a training tool for dogs? It’s possible, but not likely unless you okay it. That being said, while many people focus a lot of attention on becoming organ donors (and for good reason) many people fail to consider donating tissue remains to train cadaver dogs.

Some facts about training cadaver dogs

It takes less than a half of a teaspoon of tissue to train a dog. The way a cadaver dog is trained (generally) is by having a handler use several plastic containers, only one of which has the human tissue inside of it. The other containers are empty. These containers are scattered across an area. When the dog reaches the area where the human tissue container is, he’s rewarded with a toy. The exercise is repeated (with the remains moving to a new area). Over time, the dog will associate the smell of the human tissue to his favorite toy, or treat. Later on, the exercise will become more complicated (animal tissue will be introduced in a separate container). Eventually, the dog will be able to tell the difference between human remains, and the remains of any other animal.

Cadaver dogs are regular visitors to crime scenes, catastrophes and in missing person cases. In Colorado, a recent search for 14-year-old Dylan Redwine included cadaver dogs who sniffed out holes on frozen Vallecito Lake looking for any human remains scent. Cadaver dogs were used in the Sept. 11 tragedies, in natural disasters in Haiti, Japan, and here in the states.