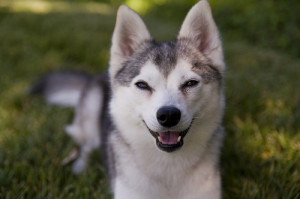 Both Miley Cyrus and James Maslow have attracted attention with their adorable Alaskan Klee Kais. This rare breed is a relatively new one, developed in the 1970s in Alaska. They`re often called miniature huskies and all three of the Alaskan Klee Kai size categories are smaller than other northern breeds such as the Siberian Husky and Alaskan Husky.

Linda Spurlin created the breed with the goal of producing an apartment sized husky. She admired the beauty of the Siberian and Alaskan Huskies but their size and energy needs made them poor choices for an apartment. Through judicious crossing of huskies with smaller breeds, she produced the Alaskan Klee Kai. They are now found around the world, but are predominantly in North America. The name “klee kai” means “little dog” in the native Eskimo language.

Recognized by the United Kennel Club and the American Rare Breed Association, they remain relatively uncommon. They have the plush coats of their bigger cousins and the same mischievous foxy faces. They come in three sizes: standard (15-17 inches tall), miniature (over 13 and under 15 inches), and toy (up to and including 13 inches). They usually weigh between ten and twenty pounds.

Like Siberian Huskies, the Alaskan Klee Kai has a talent for escaping and a love of running. They can climb and jump with great agility. They can also have a high prey drive and your yard is guaranteed to be free of squirrels and small animals. Their small size makes them ideal for apartment dwellers although they can be very vocal which may not be appreciated by apartment neighbours. In fact, they are well known for their penchant for long discussions of the minutiae of their day when their owners return home.

Although their exercise needs can be easily met, a daily walk is as important in terms of socializing as it is for exercise. Unlike the Siberian and Alaskan Huskies, the Alaskan Klee Kai can be quite shy and needs extensive socializing. It is recommended that you bring your dog out to meet people and expose them to new situations as much as possible.

While northern breeds have a wild beauty all of their own, it is important to do your research before purchasing a puppy. This is a rare breed and the Alaskan Klee Kai Association of America must approve dogs before they are bred at this time. This means that you may end up waiting awhile before a puppy is available. It is always better to wait for a puppy from a good breeder than to buy one on impulse from someone trying to make some money on their popularity. Check out the parent club website for more information.