Home Breed News Your Dog Can Read Your Mind 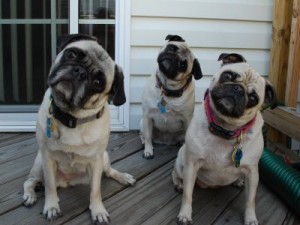 The answer to the question, “Can Dogs Read Humans Minds?” is startling, yes they can.  In fact, dogs are actually born with what it takes to be so in tune to their owners minds, that they can instinctively determine when you are happy, healthy, depressed, tired, stressed out, when you have a headache, as well as other things.  According to a recent study published in the journal Learning and Behavior, dogs do have some natural ability to sense when they’ve got your attention, but they also hone that sense through a lifetime of experience.  Although dogs are born with a type of ‘sixth sense’, it does take exposure to their owners to refine the skill and truly be able to ‘read our minds’!

Monique Udell, the lead author of the study conducted at the University of Florida, along with her team of researchers, carried out two experiments involving both wolves and dogs.  The dogs were from both domesticated situations and shelters, and were given the opportunity to beg for food, either from a person with their eyes covered or a person who was looking directly at them.  The wolves underwent the same test in an attempt to prove that it would show whether or not they have some kind of genetic barrier that prevents them from responding to cues of attention in the same way dogs can, as previous studies have suggested.

One of the findings of the experiments showed that the shelter dogs were not nearly as good as pampered house pooches, demonstrating that exposure to humans allows dogs to hone their natural people-reading skills more.  The team of researchers also found that both the dogs and the wolves were less likely to beg for food from the people who had the eyes concealed, which indicates a “capacity to behave in accordance with a humans attentional state,” the authors wrote.  What this means is that most of the dogs and wolves displayed some kind of ability to sense how people were acting, regardless of whether or not they grew up in contact with humans.

According to the researchers, “These results suggest that dogs’ ability to follow human actions stems from a willingness to accept humans as social companions, combined with conditioning to follow the limbs and actions of humans to acquire reinforcement.  The type of attentional cues, the context in which the command is presented, and previous experience are all important.”

“What this shows is that it’s not a question of nature versus nurture,” explained Udell.  “It’s always going to be a combination to the two that informs a dog’s responsiveness to humans.”