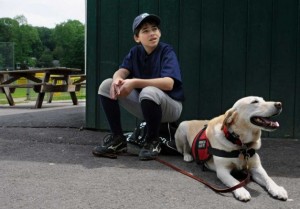 The federal Centers for Disease Control and Prevention estimates four out of every 100 children have a food allergy, and says rates are highest among preschool-age children.  From peanut allergies to other life-threatening allergens, it is becoming increasingly more popular to hear about allergy-sniffing dogs.  We’ve all heard of bomb-sniffing dogs and other medical service dogs, but allergy-sniffing dogs haven’t always been given the proper credit.

Meet Boo, a St. Bernard living with the Minicucci family of North Haven, CT.  Boo has been specially trained to sniff out peanut products and keep his owners away from them because of the daughter’s severe allergies to them.  “The dog is just one way we can help our daughter have a more normal life,” said Pam Minicucci of North Haven, whose 7-year-old daughter, Gianna, is constantly accompanied by her allergy-sniffing St. Bernard named Boo.  One of the most commendable things Boo has done for Gianna has been to keep her from even smelling peanut butter in a grocery store.

Boo was so insistent on blocking Gianna from walking down a non-food aisle in a big-box store that Gianna’s mother questioned whether the dog was ill.  When Pam Minicucci peered down below the shelves, she found the reason: a minuscule amount of peanut butter on a mouse trap far out of reach, but still close enough to potentially trigger Gianna’s allergies.  Boo was able to keep Gianna from having a severe allergy attack and potentially saving her life.

Boo’s owners are among the many people nationwide who are turning to allergy-sniffing service dogs, who accompany their handlers to detect allergens and their residue at school, during social events, and in other everyday activities, however it can be extremely costly to have such a special service dog.

It can cost as much as $10,000 to $20,000 which includes the training to teach the dog how to sniff out specific allergens, then alert the handler with a certain signal.  The training for Boo and other allergy-sniffing dogs is similar to that of police dogs learning to track scents or dogs being trained to sniff out explosives for the military.

Although expensive, this form of safety prevention for children with allergies is of vital importance to so many families.  Meet Rocko in this video and see how he is companion to 8 year old Riley, preventing her from coming into contact with peanuts.