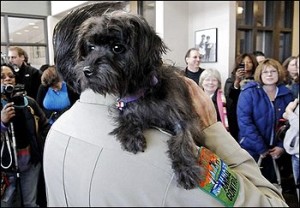 Minneapolis, MN – It’s a whole new life for the puppy who recently made national headlines for almost being airmailed by its owner.  Guess became a “warden of the state” and was finally rewarded with a new family last Friday.  The traumatic experience finds the puppy with a new name, new home, and the start of a better life.   Due to the outpouring of people interested in rescuing the fuzzy black 5-month old Schnauzer-Poodle mix, Minneapolis Animal Care and Control held a drawing to decide the lucky new owner.

Minneapolis resident, Terri Ford, was the lucky winner!   After her name was drawn and she passed a pre-adoption screening application, Guess became a member of her family.  An exuberant Terri said, “I never win anything,” while she threw her arms up in the air in excitement after learning she had won the drawing.  She goes on to say, “I think it might be good to get out of my pajamas and out of the house!”  He tugs at everyone’s heartstrings,” Ford said.  “He’s not only adorable, but he’s gone through some trauma.”

Ford, who used to be a legal assistant but is currently unemployed, said she already has a black cat named Danvers and will come up with an “odd” new name for Guess.  Because of her work status, she will have plenty of time to housebreak and train her newest family member.

Ford said she heard about Guess on the news, during the January 25th incident that made national headlines and shocked the public.  Previous owner, 29-year-old Stacey Champion, has been charged with animal cruelty after she attempted to mail Guess to her son as a birthday present.  Apparently postal workers heard noises coming from a box going from Minneapolis to Atlanta, Georgia.  After the package began to move, workers opened it, only to find the scared black puppy inside.  Officials say that the trip surely would have killed the poor pup.  Just like children are taken away from abusive households, so was Guess.  He officially became the property of the city when Champion was unable to post bond.

In addition to new owner, Ford, hundreds of calls came in from Minneapolis and around the world, asking to adopt the puppy.  Guess is more than just a rescued puppy, he’s a celebrity.  Because of his traumatic, yet happy-ending story, shelter officials have been able to also draw attention to other homeless pets.  “Ten pets were adopted last week,” shelter official Jeanette Wiedemeier Bower said.  “Usually, only one or two animals are adopted per week this time of year, he [Guess] has really allowed us to turn lemons into lemonade,” Wiedemeier Bower said of Guess.

Before and after the drawing, the almost 50 visitors toured the animal cages and admired other dogs and cats that were up available for adoption.  Six more animals were adopted after Friday’s drawing.