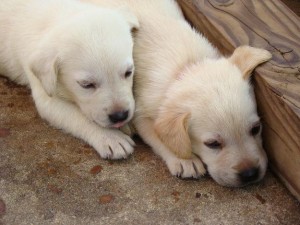 Cincinnati – Two Labrador Retriever puppies who were born blind have been given a whole new outlook on life thanks to three dedicated volunteers who provided the eye surgery that restored their sight.  Both puppies are now starting to be able to follow people and toys with their eyes, a feat unthinkable just a few short weeks ago.  Lilly and Murphy were born three months ago with opaque cataracts that left them functionally blind, as well as dropped of at a Northern Kentucky animal shelter, unwanted.

Sycamore Township veterinarian, Sheri Kyle, heard about the blind pups, and agreed to take them in at Kyle’s New Hope Animal Rescue, an animal shelter that she runs.  Although Kyle was not able to perform the sight restoring surgery herself, she reached out in the hopes of finding someone who could, who turned out to be Michael Snyder, a cataract specialist with Cincinnati Eye Institute in Blue Ash.

Coincidentally, Kyle’s colleague, Nina Owens, knew Snyder.  Their daughters play basketball together.  “We were at a game and Dr. Owens told me about the puppies and said, ‘It’s a shame you can’t do this,’ and I said to myself, ‘Why not?'” Snyder said.  He consulted some local veterinary ophthalmologists, did some additional research, and the puppies had surgery February 24.

In addition to Michael Snyder handling the anesthesiology , two members of the Cincinnati Eye Institute, Rhonda Kurz, director of nursing, and Gary Reed, a surgical technician, also volunteered, allowing the surgery to take place.  Lilly and Murphy are expected to make a full recovery, and had it not been for the people that volunteered their time and money for the surgery, both puppies could have been euthanized.

Sandy Nelson, who adopted Murphy, said there’s no way she and her husband, Kristian, could have afforded to pay for the surgery.  In addition to raising their two kids, 9 and 12, they’re also paying for allergy medicine for their older dog, Apollo.  It is becoming an increasing problem for many families to pay for expensive medical treatments for their pets, which can sometimes lead to pets being left on the doorsteps of animal shelters.  It was truly a gracious act of kindness for the volunteers to provide the surgery that allowed Lilly and Murphy to be able to see the world they will now grow up in.