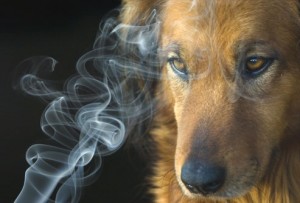 The active chemical ingredient, tetrahydrocannabinol (THC) found in marijuana is extremely toxic to dogs, and can result in a variety of problems from stumbling to death.  Marijuana exposure in pets causes neurologic toxicity, which is not the same as the “high” that people experience.  While it may appear that the animal is exhibiting the same effects THC has on humans, it is a completely different story.

While dogs are at risk for developing symptoms due to second-hand marijuana smoke, the majority of problems arise from actually ingesting it from things like brownies, cookies, and butter.  The risk increases in a household where the dog would have ready access to the leaves, stems, and even joints (where the paper is ingested as well).

Symptoms of marijuana in dogs

Because THC is so rapidly absorbed into the bloodstream, you may start to notice symptoms in just a few minutes after exposure, depending on whether it was second-hand smoke or ingestion.

Dogs may exhibit mild to moderate symptoms for a few days as the THC is slowly released from fat stores.  If you think your pet may have been exposed to marijuana, contact your veterinarian right away.  Usually the first step they will take is to try to eradicate the toxins from the bloodstream.  They do this by administering a medication that will cause vomiting, then give a activated charcoal to help absorb the rest of the THC.  Depending on the severity of the exposure, hospitalization may be required.

In order to prevent dogs from developing any of these symptoms, make sure to eliminate any possible risk.  If you live in a household where marijuana is prevalent, at least keep it out of reach of your pets.  Don’t smoke in the same room as your pets, and absolutely don’t feed them anything with THC in it.