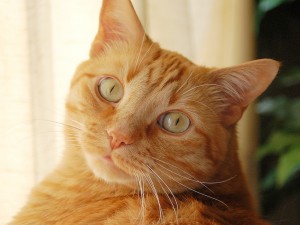 Duluth, MN – It was a grim and lonely few weeks outside in the cold, snow, and ice for stray cat, later named Aslan, before a local couple realized the need to take action.  After seeing the cat outside a few times, it was apparent that the cat was desperately in need of a warm and loving environment.  Duluth Animal Shelter became that safe haven for Aslan, where he was nurtured back to good health.

As a general rule of thumb, if it’s too cold for you to go outside without a jacket, it’s too cold to leave your pets outside, especially cats, who are prone to frostbite.  Animal control officer, Carrie Lane, described the cat upon arrival to the animal shelter as “…emaciated, its paws were frostbitten, and its ears were chewed by ear mites.  One of its ear tips had fallen off from the frostbite, and rigor mortis was beginning to set in,” Lane said,” and the cat was comatose.  The only noticeable signs of life were its barely moving paws and a faint purr.”

Shelter employees worked all day to bring back signs of life to the abandoned cat, but did not expect it to live through the night.  Whether it was a stroke of good luck, or just not Aslan’s time to go, he started making his recovery and was sitting at full attention by the next morning!  Just two days later, Aslan was walking again, although a little unsteady on his feet.  Carrie Lane said, “He’s cute, and you can just tell he’s happy to be alive.  When Aslan first arrived at the Duluth Animal Shelter, he was assumed to be older.  With a check of the teeth, it was confirmed that Aslan is only 2 years old.

Aslan, named after C.F. Lewis’ lion, should be available for adoption this week at Animal Allies Humane Society, located at 4006 Airport Road, Duluth, MN.  Although he will never be able to go outside again due to the horrific injuries he suffered from the cold, Aslan is playful and loving just the same.