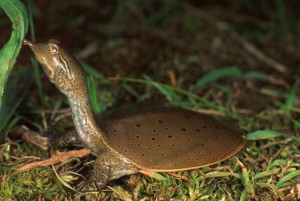 Lacey Township, NJ – What were 10 soft-shell turtles doing close to a thousand miles away from their native environments, Florida, Georgia, and Alabama?  That remains the question ever since Popcorn Park Zoo Animal Rescue and Sanctuary received a unique call for help last Thursday, after a woman spotted turtles along side the Passaic River in West New York.  Shelter manager, D.J. Infield, said, “When I opened up the box, I got the fright of my life because I’d never seen those kind of turtles before.”

Surprisingly, the only wounds the 6 surviving turtles sustained, resulted from a seagull attack right before their rescue.  Due to the severe climate change from their native region, 4 of the soft-shell turtles did not survive.

“They definitely would not survive in our climate,” said John Bergmann, general manager of Popcorn Park Zoo in Lacey Township.  “That is why we believe all 10 turtles were dumped here.”  It is such a serious matter, that The Associated Humane Societies is offering a $1,000 reward for any information leading to the arrest and conviction of whomever left the turtles by the roadside.  The 6 turtles are recovering safely at Popcorn Park Zoo, but Bergmann is looking for a facility or individual wildlife rehabilitator in the south that can adequately care for the turtles.

The 6 recovering turtles are lucky in that such cold weather should have made it impossible to survive.  They are more susceptible to injury and cold weather than other turtles because of their soft-shell, called a carapace.  These extremely shy animals, which will snap if threatened, are distinguishable by a round, long, slender nose.  While males grow to approximately a foot in length, the females can grow to as long as 24 inches.

Due to a warning posed by the Centers for Disease Control and Prevention indicating that certain species of turtles pose a risk of contracting salmonella, New Jersey is one of the states that has made it illegal to own a pet turtle without a permit.

At just 5 inches in length upon arrival to safety, the baby soft-shell turtles are expected to make a full recovery, but are in need of help from the south.