Home Exotic Pets News Pig Gets a Day in Court 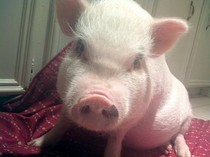 Wilber is a one-and-a-half-year-old Vietnamese pot-bellied pig who was being evicted by a Houston Texas Home Owner Association (HOA) known as the Cypresswood Community Improvement Association.  Wilber lives with the Sardo family and they were informed in a letter on April 6, 2011 that their Association wanted Wilber removed from their home and threatened to file a lawsuit.  The reasoning behind the letter was that pot-bellied pigs are livestock and are not “common” or “traditional” pets and are therefore forbidden by Association rules.

The case against Wilber came down to a clause in the Association’s by laws regarding ownership of pets as “domestic animals commonly and traditionally kept as household pets and shall not include any wild, semi-wild, or semi-domesticated animal.”

The Sardo family filed suit to declare that this particular pig breed is a “household pet” and should be able to remain in their home.  Our ancestors domesticated pigs to primarily provided food but pigs are very smart animals and are very sociable.  Potbelly pigs have been a popular pet for many decades in the US and the North American Potbellied Pig Association was organized in 1989 to provide information to owners and breeders about these animals.

On Monday, Harris District Court Judge Mike Engelhart ruled in favor of the Sardo family.  The judge stated that this pig breed is considered a household pet and they are not used for commercial purposes.  “I think we need to forget about his being about a pig for a moment and look at the broader issue of homeowner’s associations and residents,” Engelhart said.  “Homeowner’s associations are there, on one hand, to maintain a neighborhood in a particular way, but they also have responsibilities not to infringe too much on homeowner’s use of their land the way they see fit.”

Mitchell Katine represented the family in the lawsuit and said “Monday’s ruling marked the first time a Vietnamese pot-bellied pig has been recognized as a pet in court, but it also set a precedent to let homeowners associations know they cannot micro-manage their residents.”

Noted in the Association’s rules, a majority of residents can amend the bylaws to include pot-bellied pigs as an acceptable household pet but so far this has not happened.  While the family waited for the ruling Missy and Alex Sardo waited nerviously but were happy with the outcome “Oh my gosh. … It’s just unbelievable,” Missy said after she heard the news.  “It’s wonderful.”  Wilber Sardo the pot-bellied pig has over 5,000 Facebook fans on his Facebook Page and has a “Wilber cam”with live feeds to his page.