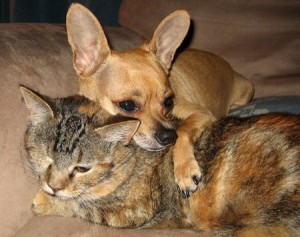 The number of cats and dogs that are in need of good homes are rising, especially with the spring and summer months bringing about the addition of newborns.  Many times animals are simply dropped off at animal shelters, where they will remain until their untimely death.  Many animal shelters do not advocate euthanization, but just as many do, sentencing the animals that could become someone’s pet to death.  The release of the Facebook Page called Pet Pardons is one step in the right direction to help relieve these pets from death row.  Pet Pardons is also a FB application that you can install in order to become part of the animal saving goal.

With Pet Pardons, you can post a pet who is on death row (or in a no-kill shelter) to try and save them, or go to a pet’s profile and click “Advocate” to share the pet on your wall in the hopes they will find the help they need.  The more Advocates a pet has, the better chance they have of being seen by someone who can save them.  Erin Brady from Chardon is one such person who is using Pet Pardons to save animals from their date with death.  Erin was asked for help on Facebook and is now awaiting the arrival of 10 kittens who are in need of a home.

“If I could take more in, I would really do it,” Erin said.  “This family has less than 24-hours to live, they need to be pulled and rescued, urgent, so, I was like, I’ll foster them.”  Because of Pet Pardons, Erin was connected to people in other states who know of animals on ‘death row’.  Volunteers connect online and work together to foster animals so they’re not euthanized in crowded shelters.  “It’s probably saved over 2,000 animals at this point, just by showing their pictures and getting it out there,” said Erin.

Pet Pardons mission is to end all euthanasia in American shelters by January 1, 2015.