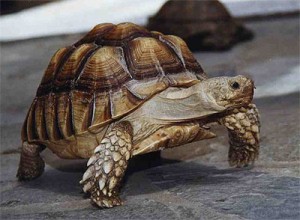 Who would ever expect to hear that a pet tortoise is to blame for a fast sweeping fire that injured a firefighter and three police officers in Brooklyn?  That’s exactly what Giovani, a six year-old pet tortoise, is under suspicion of.  Tortoise’s are known to be among the slowest of animals, so how could this possibly be true?  While he was home alone, Giovani attempted an escape from his plastic terrarium, tipping it over and sending the heat lamp crashing to the floor.  The lamp broke and ignited paint thinner and paint; the residents art supplies that were nearby Giovani’s tank.

Giovani is about the size of a soccer ball, and is an African spurred tortoise, who obviously had some tricks up his shell!  Fire officials said it took sixty of them a half an hour to put out the fast-moving blaze that tore through the third story apartment, which was being rented by an art student along with his family.  The student, Mohamed Salem, attends the New York Borough of Manhattan Community College.  No one was home during the bizarre start to this fire, however there was another turtle in a different tank did not make it out alive.

Firefighters eventually found Giovani in the kitchen, and were able to remove him from the flames in time to receive treatment.  Giovani’s family is a little skeptical of the New York Fire Department’s theory of the fire-starting tortoise.  Mohamed’s father, Ibrahim Salem, who was initially told by authorities the fire was electrical, seemed especially enamored by the pet tortoise.  “How did he make the fire?” he asked a New York Post reporter, all while “patting Giovani’s shell and tickling his feet.”

Mohamed also has his doubts about Giovani being the cause of the fire.  “I don’t think he could have done it,” he said, “if it was him, he would done it the first time I got him, a couple months ago.”  Whatever the true reason behind this fire that Giovani is being blamed for, the family is happy to be alive and safe, but will miss the other turtle that wasn’t as lucky.