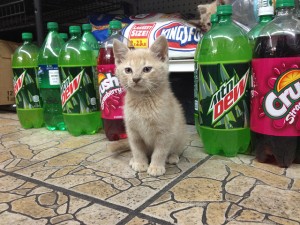 In the heart of New York City’s bodega jungle, a predator is lurking. Many stores are becoming homes to bodega cats. These cats keep the markets free of vermin and add character to their neighborhoods. Technically, it is against the health code to have an animal wandering loose in a place that sells food. Owners that are caught with bodega cats on site can be fined. However, they are also fined if they have mice or other rodents in residence and a cat is considered to be far more palatable to customers than vermin.

Many cats become neighborhood favourites and customers frequently greet them by name. When they retire they may be placed in another home or retire to a store employee’s permanent care. One famous ex-bodega mouser, Estorbo, has retired to Cobble Hill. He keeps his fans up to date on his adventures through his blog. Estorbo is also on Twitter and Facebook.

Another bodega cat who has recently become famous is February. This five year old, Main Coone was adopted as a kitten from the ASPCA. She lives at the K & B Inc. Candy Store at 1107 First Ave in the Upper East Side. February is famous for hating dogs. Now, most cats aren’t crazy about dogs, but February takes it to new heights.

She likes to lounge in the front window and watch the foot traffic go by. “If she sees a dog outside, she’ll punch the glass with her paw,” says store manager, Bharat Patel. Her dislike of dogs is so intense that they have posted a “No Pets In Store” sign in the door. One lady failed to notice the sign and ended up with bloody fingers when she rescued her dog from February’s claws in the store.

February can be found periodically wandering out of the store to stand in front of the neighboring doggy daycare, Running Paws. Here, she stalks the dogs as they arrive and leave the daycare with their owners. She has been known to block the entrance, leaving dog and owner stranded on the sidewalk, afraid to go by her.

What is it about February that scares dogs so much? No one really knows. Perhaps it is her feline confidence and cold stare. Patrons of her home store have no fear and she is known to stop for a cuddle when people visit the bodega. They just can’t have a dog with them. There is one dog that often pauses outside the store to stare down the cat. He is not intimidated when she bats the glass. The three-legged canine is teasingly known as her “boyfriend”.

This bodega cat is a fixture in her neighborhood and, like so many other bodega cats, can be found prowling her store with feline swagger. Drop by for a visit, but just don’t bring your dog.