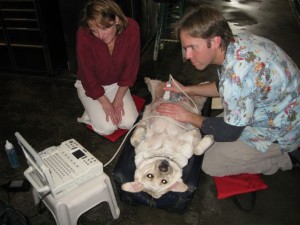 The number of veterinarians who make house calls is growing substantially and this trend will only gain popularity as the benefits are more widely known.  While it is more common in larger cities and higher income areas, house calls can make a difference in the overall health and well being of your pet.

Dr. Bonnie Beaver, a professor at Texas A&M University’s College of Veterinary Medicine and director of the American College of Veterinary Behaviorists said the trend is a return to tradition.  “We used to call them farm calls.”  “While the vet was taking care of cows and horses and other livestock, he would take care of the family dogs and cats too.”

Veterinarians say that while a house call costs a lot more money than a typical visit to the office, it is worth it in many ways.  One of the benefits of making house calls is that seeing an animal at its home enhances the bond between the vet, pet and owner.

Lisa Beagan, of the Mobile Pet Vet in Severna Park, Md., says that it helps to reduce the stress on the animal.  “For a lot of animals, it’s stressful to go into a strange hospital with all kinds of smells.  Cats and dogs are so smell-sensitive, it’s like getting bombarded with a kaleidoscope of colors.  At home, they don’t realize they are having an exam or shots.”

Helping to solve behavioral problems is another benefit to vets making house calls.  For example, one behavior problem that was solved by Beagan was the issue of a cat that wouldn’t stop peeing outside of its litter box.  Beagan visited the home and discovered the root cause of the problem.  Once the underlying issue was fixed, the cat started peeing in the litter box.

While not every behavior problem can be fixed by vets making house calls, hopefully the trend will catch on in more areas, bringing pets relief and help where they otherwise may not have gotten it.