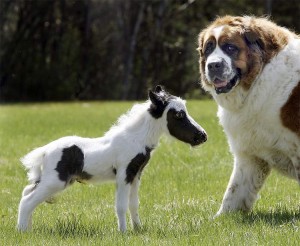 Only six pounds at birth, he weighed less than the average baby. He was only fourteen inches tall, which is shorter than the average baby as well. Einstein is a healthy, full term bouncing baby…horse? Meet Einstein, the world’s smallest stallion. Born in April, 2010 in Barnstead, New Hampshire, at Tiz Miniature Horse Farm, Einstein continually makes the news. Within two weeks of his birth he had received more than 4,000 visitors. His media appearances have included the Oprah Winfrey show, Good Morning America, and The View, where he was delighted to eat graham crackers with Whoopi Goldberg. He has also been written up in various newspapers around the world including the San Francisco Chronicle, the Boston Herald, USA Today, and People Magazine.

The miniature horse was originally bred as a pet for the Hapsburg nobility in the 17th century. It is thought to have been developed from Shetland and Dartmoor ponies. Miniature horses are typically eighteen pounds at birth and twenty-one inches tall, so Einstein was substantially smaller than average. At maturity, most miniature horses weigh in the fifty pound range. Although dwarf genes have been bred into miniature horses to reduce their size, Einstein shows no signs of dwarfism, which include short necks, thick bodies, domed foreheads and generally disproportionate features. Furthermore, his dam, Finesse, is a tall 32” miniature horse and his sire, Painted Feather, stands 30”. In all aspects, he appears to just be a very small horse.

Guinness won’t certify him as the world’s smallest horse until his fourth birthday but as we approach his third birthday, it is apparent that Einstein has stopped growing. He is now twenty inches tall which will put him in the record books. Einstein usually celebrates his birthday with local children. He has many fans, mostly younger, due to his children’s book called “A Friend For Einstein The Smallest Stallion”. The book is written by his owners Charlie Cantrell and Dr Rachel Wagner.

Too small to play with regular sized horses, Einstein’s best friend is a boxer named Lilly. He also has two dwarf Nigerian goats, Eleanor and Isabelle, to keep him company. He has also been known to keep company with a neighbor’s normal sized horse, Playboy, and a Saint Bernard that lives on the farm where he was born. Most of all, Einstein loves to cuddle with his family. Miniature horses are known for lively temperaments and being easy keepers. Commonly kept as pets, they are also popular choices for therapeutic programs. They have even been used as seeing eye guides for the blind.

Miniature horses often live 35 or more years with the oldest known ones being 50 years of age, so it looks like Einstein will continue to entertain his fans for many years to come. You can find him on Twitter, YouTube, and Facebook. 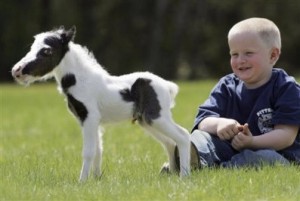