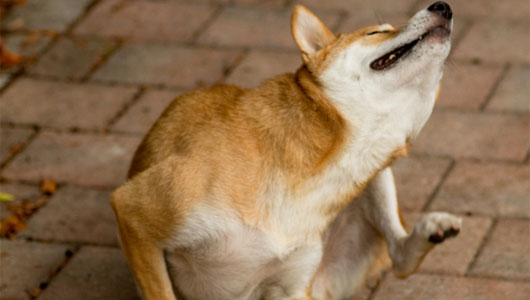 Getting rid of demodectic mange can be a rather difficult task, mainly because it seems that the treatments given for it don’t always work.  What can cure a dog’s mange in a week for one person may require another to wait a month before seeing any result, if at all.

This is partly why everyone seems to have differing theories about the best treatment option to use for demodectic mange, and why there are so many suggestions floating about.  One example is, of course, the infamous ‘motor oil treatment’, where the dog is drenched in the greasy, synthetic substance while praying for a positive outcome.  Regardless of the forms they take, it should be noted that most, if not all of them have some merit.  However, what they’re all missing is a crucial component in their puzzle that makes their remedies foolproof, and that component is the one reason why everyone’s finding it so hard to cure demodectic mange reliably.

So what’s the mystery ingredient?  Well, it’s the immune system.

This little piece of information may be familiar to some, but for others it could just be the thing to steer their efforts in the right direction.  You may have heard about the immune system being related to demodectic mange somewhere, but just in case you haven’t, let’s do a quick overview of the causes of demodectic mange, and then we’ll move on to how the immune system can factor into it.

The Immune System: How It Works

Meet the demodex mite and his humongous family.  They are the sole reason why your dog is experiencing massive hair loss, leathery skin and all other symptoms of demodectic mange.  He wriggles around on your dog’s skin, munching on oil and dirt and squeezing out eggs in the hair follicles, which irritates it a lot and causes the hairs to drop off your dog’s back.  Also, his dietary and hygiene habits also cause the skin to be intensely irritated as well, causing red sores to erupt all over.  That’s how a dog gets his demodectic mange, and how you get a massive headache-inducing problem in your hands.

The truth is that demodex mites aren’t malicious parasites all of the time.  About 90% of the time, the mites are actually rather harmless.  They don’t cause hair loss and they don’t go around creating sores.  In fact, they’re so peaceful that their presence is virtually unnoticed by everyone.

For example, did you know that all dogs naturally harbor demodex mites on their skin?  If the mites were a really nasty lot, every dog on the planet would be suffering from mange.  But they don’t, so that does prove something.  To go even further, even humans have demodex mites living on them.  They could even be puttering about on your nose right now.  There’s no need to be afraid of them, but feel free to take a couple seconds now to scratch your nose, just to reassure yourself.  If he really is harmless, what’s causing all this trouble, then?

This is where the dog’s immune system comes into the big picture: it’s the only one monitoring the mites.  More specifically, they’re constantly looking into the number of them that live on the dog.  In normal circumstances, the immune system actively suppresses the demodex mites’ ability to reproduce.  Without that suppression, the mites are able to enlarge their population so quickly that their growth can only be labeled as ‘exponential’.  Thus, controlling their population is the only thing the immune system is good at, and it’s the only thing keeping them from running amok.  It’s kind of like a bouncer in a nightclub; they’re there to make sure everyone has a good time without trashing the place, and if someone (the mites) get a bit rowdy, they get escorted off the premises (the dog’s skin).

But all security systems have their vulnerabilities, and a dog’s immunity is no exception.  They are frequently exposed to a multitude of threats, such as stress, a new vaccine, or even a prior illness.  The immune system is usually strong enough to withstand those things and still manage to control the mites, but they do have their limits.  Once it gets too much for them to handle, the dog’s immunity becomes weaker as a whole; they’re spread so thin that they can’t respond effectively to all the things they’re supposed to protect against.

When the immune system is weakened by some factor or other, the mites will tend to seize control where they can, and start reproducing their numbers way past the limit previously set.  This is normally how mange starts, and manifests in several small bald spots that you’ll be able to see on your dog, usually in the head area.

But it obviously doesn’t stop there.  Once the mite population reaches critical mass, the mites will be able to suppress the immune system entirely due to the sheer quantity of their kind.  At this point, the drastic loss of hair and badly damaged skin will become apparent to the owner.

So as you can tell by now, the immune system plays a vital part in preventing the onset of a dog’s demodectic mange.  It’s the only thing keeping the ever-present demodex mites from breaking loose and multiplying like crazy; without it, the mites will cause significant damage to the skin due to their activities.

What This Means for You

If you have a dog with demodectic mange, it’s important for you to understand how the immune system plays a huge part in controlling the skin problem.  Of course, if you’re reading this, I’m sure you have a very good idea of how it goes.

Lots of medicines and remedies out there focus primarily on how to kill the mites.  In itself, it’s not a bad plan at all – quite a few cases are solved just by focusing on this aspect – but not everyone is that lucky.  The fact remains that if no attention is paid to the state of the immune system while reducing the number of demodex mites on your dog’s skin, it’s very likely that the mange will always return.