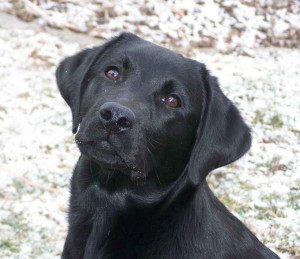 Fukuoka, Japan – So what if your dog can roll over and dance for a treat, this Labrador Retriever can diagnose early-stage colon cancer.  Pet ownership has been shown to greatly inspire a healthy lifestyle, including benefits such as lowering blood pressure, cholesterol, and triglycerides, but according to a recent study, it is possible to teach a dog to aid in medical research; diagnosing cancer.  Japan scientists trained “Marine”, a female black Labrador Retriever, to sniff out the prominent odor in colon cancer with up to 98 percent accuracy, according to a study published in the Journal Gut.

The researchers indicate in the study how they first trained Marine to detect other forms of cancer, such as bladder, esophageal and lung cancer.  She was taught to sniff cups of exhaled breath samples, and then to sit down in front of the cup that contained the sample from the patient with cancer.  When Marine got it right, she was rewarded with a tennis ball.

Dr. Hideto Sonoda, from the department of surgery at the Postgraduate School of Medicine at Kyushu University in Fukuoka, collected stool and breath samples from 48 patients with colorectal cancer that were to be tested in the study.  In addition, 200 similar samples were collected from volunteers who have never had cancer, and 55 samples from people with a previous cancer history.

In just seven months time, Marine learned to distinguish the cancerous samples from non-cancerous samples 95 percent of the time in the breath tests and in 37 of 38 stool tests, when compared to a typical colonoscopy.

One particularly notable finding from the study authors indicates that one of the key colon cancer screening tools currently used, called a fecal occult blood test or FOBT, only picks up early-stage disease in one out of 10 cases.  This study gives hope to the future of medicine and the emerging ways of detecting colon cancer in its early stages.

Just as other breeds of dogs have been taught to sniff out things like bombs, drugs, and other scents, the proof is in the research that Labrador Retriever’s are capable of learning to help diagnose cancer.  Will it become the next first step if colon cancer is suspected?  Probably not, according to the study authors, “using dogs to screen for cancer is likely to be expensive and impractical.”

However, the research does indicate that certain odors are detectable, meaning that it is possible to develop another form of detecting the early-stage colorectal cancer instead of using dogs.