Home Breed News Cats Illness In Many Cats Reflective Of Stress, Not Sickness 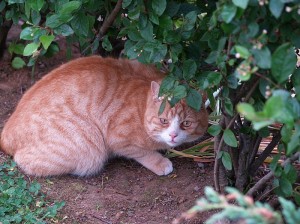 Columbus, OH – Different routines, strange noises, and negative attention can cause healthy cats to exhibit signs of sickness a three-year study conducted at Ohio State University reveals. The study included 32 cats, twelve of which were healthy, and the twenty others exhibiting signs of sickness and distress. The sick cats were provided by owners who were otherwise opting for euthanasia.

The study showed that as stress levels were reduced the sick cats became healthier. Some of these cats suffered from chronic pain syndrome that affected the bladder and other conditions such as feline interstitial cystitis (FIC). The study, funded by the National Institutes of Health, was conducted by Doctoral candidate Judi Stella, Tony Buffington, a professor of veterinary clinical sciences, and Linda Lord, an assistant professor in the school’s Department of Veterinary Preventive Medicine, who observed the colony of neutered and spayed cats at the OSU’s research lab.

The early parts of the study were dedicated to making each cat’s life the same, including cages, food, music, toys,  and attention from caretakers and other cats. “This study shows that an enriched environment – one that includes hiding areas, toys, bedding and other physical features, plus an everyday routine including a consistent caregiver, feeding and play times – reduces or altogether prevents some common signs of feline sickness such as decreased appetite, vomiting or eliminating outside of their litter boxes. The significance is that minimizing stress can decrease illness,” said Jane Brunt, a member of the CATalyst Council, Inc. in Timonium, Md., and owner and veterinarian at Cat Hospital at Towson for over 20 years.

Cat owners should also realize that when they have a bad day that they should be careful not to let it effect their pet, as this proves to increase stress as well. When the cats were distressed they would eat less, vomit, and urinate or defecate outside of the litter box, the researchers found. The distress could be caused by a dirty litter box, strange noises, or altered routine. These times of distress would double or triple the number of sick episodes for the cats.

“Cat owners can be educated about managing and maintaining an enriched environment,” Brunt said. “Several parallel human studies are corroborated by this and other feline studies, indicating that stress and disease are linked.”

The study provides data for cat owners to realize that adjusting the cats environment to the things they require, like hiding places and quiet time, may reduce symptoms of sickness. In turn, fewer owners will opt for euthanasia for a cat they believe to be too sick as their symptoms may disappear with stress factors reduced. Creating a “safe area” for your cat, with toys, clean litter, reduced noise, and food can add years to their life.