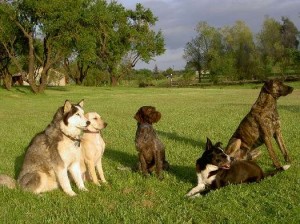 Surry County, VA – NFL player, Michael Vick, stands to watch his former home in Surry County become the Good Newz Rehab Center for chained and penned dogs, as announced on February 4th.  A Pennsylvania-based animal rights group, Dogs Deserve Better, is attempting to raise a minimum of $600,000 by March 20 to purchase the property to create a animal sanctuary.

If the purchase of the property is successful, Dogs Deserve Better will acquire the 4600 square foot home resting on 15 acres of land that was once known as the Bad Newz Kennels dog-fighting operation.  In addition, the property comes complete with kennels and shelters, which will be updated during the project.

Dogs Deserve Better is a national non-profit agency focused on taking care of abused and abandoned dogs, and freeing them from chains and penned environments.  “There are 15 acres where we will build a state-of-the-art dog caretaking facility and train these neglected, unsocialized dogs to live inside as part of the family,” said the organization’s founder, Tamica Thayne.  “Chaining dogs can result in attacks on children and adults because such dogs are often unsocialized and act territorial.”

To prove just how serious and determined she is to free dogs from chains, she chained herself to a doghouse and stood outside the Pennsylvania State capital building for 52 days, rain and shine.

Vick’s former home was the site of dog fighting, neglect, and other abuse for close to six years, which he financed as well.  He was finally convicted of the felony charge, being involved in an interstate dog fighting conspiracy.  For this he received 23 months in prison.  Upon his release from jail and his return to football, Vick has spent time speaking about his horrific actions and warns others about following in his footsteps, criminally speaking.  Since his return to football, he proves that is where his talent truly lies.