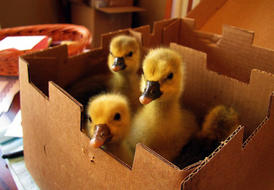 Charlestown, WA – Some have suggested that you can have chickens, ducks and geese as pets. Suzanne McMinn, of Roane County, has enjoyed raising chickens and ducks as pets and looks forward to the spring hatching season.

This year after making a promise to not acquire any new additions to her “flock” she was given a box of goslings for her birthday. “I tried to be good this year. I really did! I made a pact with myself and everyone around me that there would be no new chickens or ducks this year. Then a box of goslings was given to me for my birthday. So it’s not my fault, though I did forget to add “geese” to the no new chickens or ducks list.”

“I’ve wanted geese for a long time, so I’m thrilled to have them,” said McMinn. “They are American Blue and American Lavender geese.  This is a calm, friendly, medium-size goose, and quite beautiful.  American Blues are bluish-gray while Lavenders are a silvery-lavender.  They are good layers as well as good meat birds.   (I have yet to eat even one of my chickens, though, so it’s not too likely these will end up in the pot.)”

These geese came from the Holderread Waterfowl Farm and Preservation Center in Oregon for the study and conservation of rare and endangered waterfowl. Geese are not seen as much on farms as they once were and so many breeds are now considered rare and even endangered. The University of Minnesota Extension Services estimates that geese make up less than one percent of the poultry population.

“There are always tales of people being chased by geese, and many people are afraid to keep them for that reason, but geese are actually very sociable, docile animals that can become almost like pets. The key to keeping a friendly goose is to spend time around them when they’re young and never feed them directly from your hand, which can lead them into negative behavior around people. Raised properly, they are interested in people, but not aggressive, cheerful, curious about the world, and a joy to observe. They are elegant, but silly at the same time, said McMinn.”

McMinn goes on to say, “Geese are good lawnmowers, and they also make great watchdogs.  They will make a racket if anyone comes around.  They are a wonderful addition to a small farm or even a few acres.  They are no more trouble to keep than chickens.  Since they aren’t as popular as chickens and ducks, they are a little more difficult to find for sale at the feed store, but they can be ordered online and shipped anywhere. Ours came all the way from Oregon and arrived healthy and active.”

While there are those like McMinn that enjoy the hatching season, some like Jo Ruprecht, Ph.D., of New Mexico State University have come to dread it. “I’ve worked through the Chihuahuan Desert Wildlife Rescue for 15 years assisting with ducks and domestic birds. I’ve come to dread Easter because of the predictable drop-offs that begin within days.”

“In the past two years I’ve seen an increase in the number of birds left at New Mexico State University’s Alumni Pond and at the city’s Young Park. Perhaps the saddest times have been when a pair of ducks or geese has been dropped off and one is killed, leaving the other to fend for itself alone in a strange place. Any Easter creature is a domestic animal and doesn’t belong in a wild place. A stuffed toy would be a much kinder gift all the way around.”

If you decide that having geese as pets are right for your farm or homestead, you may want to consider rare or endangered geese. To find out more about rare and endangered breeds you may want to visit American Livestock Breeds Conservancy.