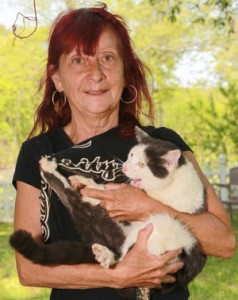 Anderson, SC – It was a surprising and glorious day for a cat’s owner when she discovered that her feline friend had survived nine full days stuck up in a tree.  During these nine days, the cat, named Buster, miraculousy lived through two rain and thunderstorms, which could have been detrimental to not only the cat’s health, but to his life as well.  The 150-foot-tall loblolly pine in Anderson, South Carolina, became Buster’s refuge after being scared by a neighbor and a barking dog.

Buster’s owner, Linda Megretto, said, “I expected to find him dead on the ground Monday morning, it was his ninth day, and I figure he’d gone through his ninth life.”  Linda’s husband, Andrew, climbed to the top of a 40-foot ladder and managed to coax the cat down.  As it turns out, Buster got spooked when Megretto’s neighbor on Broadway Lake Road, rousted the cat out from under his shed with a rake because his dog was barking.  Buster climbed up about 50 feet past the pine tree’s lowest branch, then when a neighbor boy tried to reach him from the ladder, he climbed up another 50 feet.  Being a typical cat, Buster was then too scared to climb back down.

When Linda realized her cat had escaped to safety in the tree, her first reaction to call emergency services which included the fire department, the humane society, the police, and animal control but to her and her neighbors surprise, no one would respond to her call for help.  Chad McBride, spokesman for the Anderson County Sheriff’s Office, said he could not track down any record that report of a cat in a tree cat had been called in.  “Animal control officers would normally respond” he said.  They are able to get cats down usually with a treat, and if that doesn’t work, they would probably have to contact an animal rescue group.  We don’t have equipment to go up into a tree.”

Due to liability issues, firefighters don’t respond to these types of calls anymore, but Chief Billy Gibson of the Anderson County Fire Department does provide alternative ways to get the cats, or other animals, to come out of a tree.  “The cat gets scared and runs from us,” Gibson said.  “We have had firefighters get bit.  It hasn’t happened here, but firefighters have also gotten injured falling and things like that.”  His advice to pet owners is to open a can of food at the base of the tree and wait, as the animal will eventually get hungry enough to come down on his own.

Overall it was a happy day for Linda and Andrew Megretto, and especially Buster, when he was rescued from the 150 foot tall pine tree.  Linda said, “My husband is the hero.”