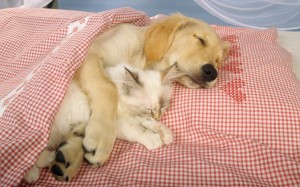 Have you ever seen your dog or cat twitch and even bark or meow in their sleep?  These are telltale signs that they are dreaming and we have scientific research that indicates that dreaming does have beneficial effects on pets.

According to a study conducted by Matthew A. Wilson, a professor in MIT’s Department of Brain and Cognitive Sciences, mice exhibited matching brain wave patterns during daily maze running and sleeping.  The matching patterns indicated that the mice were in fact re-living the experiences of the day, or dreaming!  “Based on this approach, we have determined that animals do re-experience the day’s events during sleep in a way that includes visual imagery (what they saw) and action sequences (what they did)”, said Dr. Wilson.  “That would satisfy most people’s definition of dreaming.”

The brain wave patterns were actually so clear and specific that the researchers were able to tell where in the maze the mice would be if it were awake, and whether it would be moving or standing still.  Dr. Wilson explains that “the animal is certainly recalling memories of those events as they occurred during the awake state, and it is doing so during dream sleep and that’s just what people do when they dream.”

Based on this research, it is safe to assume that dogs and cats dream as well, possibly re-living times of the day when they were active and learning…or maybe chasing another animal!

So what benefits does dreaming have for pets? “We suspect that dreaming plays a role in processing memories, enhancing learning, and problem solving,” says Dr. Wilson.  “So if you are in the midst of training an animal, it is likely that dreaming is helping them to achieve those training goals.”  Isn’t it nice to know that your efforts are not lost on your dog or cat when you are trying to teach them things?

Take a look at this little guy very obviously having a dream!