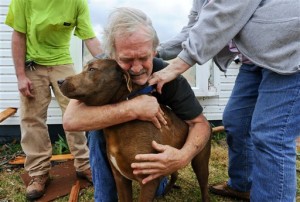 Amidst the destruction and wreckage caused by the recent tornadoes in the Midwest, a few heartwarming stories have found their way to the surface.  What can only be considered a miracle, a few beloved dogs were found alive and were reunited with their owners.  What started as sheer tragedy ended in tears of joy for some pet owners.

The tornadoes in Alabama and Indiana left a devastating toll on many lives, claiming homes, buildings, and causing massive destruction in all that was in their paths — leveled homes and flipped over buses to demolished gas stations and people’s material belongings strewn across neighborhoods.  No one would have assumed that any pet could have survived such turmoil; until a bark was heard.

It was 21 hours after the tornado had ripped through Henryville, Indiana that Ben, a black chow mix, barked to call out to rescue workers that he was alive and looking for someone to help him out from under a pile of rubble.  Ben’s owner, Elaine Dietrich Thoms, was overcome with joy when Ben was rescued in what used to be their home.  “You’re so smart,” Elaine says.  “So smart. You hid.”  Ben was weak and unsteady at first but soon shook himself and proved to be injury free!

Also in Henryville, Steve Stoffregen and his family are dealing with the massive destruction caused by the tornadoes.  The family’s two dogs, Trigger and Tyson, were found scared out of their minds, but thankfully, alive.  Take a look in this video:

In Alabama, the deadly tornado that left entire neighborhoods devastated, also left resident Greg Cook believing his dog had died; but somehow Coco lived!  Coco was home by himself when the tornado hit so when Cook arrived on the scene, he was sure he had lost his best friend.  As Cook started making his way through the debris, he found Coco in what was left of his hallway, wet and shaking…but alive.