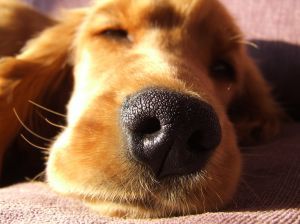 Few places in the United States have already adopted dog nose printing as a common way of identifying lost dogs, however the Canadian Kennel Club has been accepting dog nose prints as proof of identity since 1938.  The general consensus is that nose printing is a more reliable way of matching identity, as dog tags can easily be lost or even stolen.

Other forms of dog identification include the use of a microchip being implanted in the dog, however many pet owners feel this is an invasive and painful way of keeping track of their furry friend.  Microchips can also malfunction, and even become dislodged, rendering the chip useless.  Collecting the nose prints of dogs is actually painless, ink free, and can be done by the owner, simply sending the prints along with photos of the dog to the registry.

One such company, ID Systems Integrators, has developed a system called “Dognose ID” that provides a “tamperproof, painless and noninvasive way to provide a permanent record of any dog, anywhere.”  Once ID Systems Integrators receives your dogs prints and photos, you are sent a Pet Identity card imprinted with your dog’s photo and nose print, along with contact information.  You are also provided with a collar tag that includes an identification number, your phone number, and the company’s phone number.

Should your dog get lost, all you have to is contact ID Systems Integrators, and they take care of the rest.  A description, photo, and nose print is faxed to every known veterinarian and animal shelter within the owner’s area, as well as local schools.  Should the dog be found, an accurate identity can be made by comparing the nose prints.