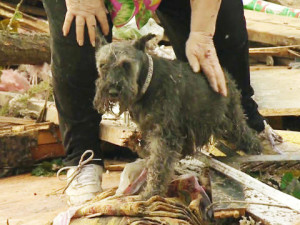 When a monster tornado tore through Moore, Oklahoma it left behind thousands of destroyed homes, many injuries and some fatalities. One of the most heartwarming tales to come out of this tragedy is that of Barbara Garcia and her miniature schnauzer, Bowser.

Garcia, 74, took refuge in a small bathroom in her home. She huddled on a stool, holding her small dog against her. She sent God two prayers – that she and her dog might survive the tornado. Although it took only a few minutes, the tornado did hit her home suddenly leaving behind only a pile of rubble. Barbara was lucky and although buried in the rubble, her injuries were only minor. She could not find her dog though.

She was being interviewed live on CBS news about the tragedy when her second prayer was answered. The dog was spotted in the rubble and together Garcia and the newscasters were able to liberate him from the debris. He appears to be relatively uninjured in the video. Garcia`s relief at finding her pet is palpable and a touching moment in the midst of a tragedy. The video has gone viral with over 500,000 views.

It inspired one Minnesota woman, Erin DeRuggiero, to reach out and help the Garcia. The Build Barbara Garcia A Home Fund is now actively raising money to help Garcia find a new home. Garcia had no home owners insurance, making it much more difficult for her to rebuild her life. Garcia`s daughter, Jackie, also lost her home in the tornado. The fund has raised over $35,000 so far and has a goal of $50,000. Garcia is overwhelmed by the support she is receiving.

Tornados and other natural disasters can leave many pets missing. While June Simpson was lucky enough to find her cat Sammi in the rubble, many pet owners are not as lucky. Groups like the Northstar Equine Foundation, International Fund for Animal Welfare, and many local animal groups are working hard to reunite pets and their families. They are also providing assistance to temporarily homeless pet owners in need of some help in feeding and caring for their animals in the aftermath of the tornado. A Facebook page has been set up to help reunite pet owners with missing animals. The American Kennel Club (AKC) is also assisting through their Companion Animal Relief Fund which provides funds to groups involved in animal care after natural disasters.

Please consider donating to help the people and animals of Moore, Oklahoma overcome the damage left behind by the tornado.