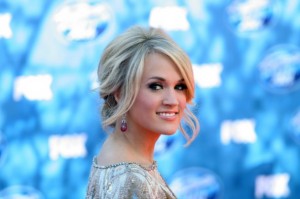 It’s always a good day when you find out that a celebrity, especially one as well known as Carrie Underwood, has a place in her heart for an animal that is clearly suffering.  Over the holiday’s Underwood rescued an abandoned dog from a highway and immediately took him to a veterinarian to be taken care of.  Carrie Underwood, a popular country singer, explained the story in her blog which she writes to keep her fans informed of her comings and goings.

Carrie Underwood had been visiting her parents in her home town of Oklahoma over the holidays.  While Underwood and her two dogs, Ace and Penny, were traveling along an interstate highway between Oklahoma and Tennessee, she noticed two dogs that were clearly abandoned on the side of the road.  Being the kind hearted person she is, it took all of a minute to pull over and tend to them.

Unfortunately one of the dogs was already dead, but the other was very much alive although bloody and limping.  Underwood scooped her up and put her into her car, driving her to the vet.  “My guess is that the dogs were thrown out of their car by their owners on the highway,” Underwood said on her blog.

Carrie named the dog Stella and gave her a temporary home for the next few days while she looked for a permanent home.  During Stella’s time at Carrie’s home, she was becoming house trained and clearly loving her time there!  “She follows me around from room to room,” Underwood wrote on her blog.  “She’s the best Lab I’ve ever been around!”

Just a day later, Underwood and her husband, Mike Fisher, found out that Stella had been adopted by their neighbors down the street, “I cried when she walked out the door,” said Underwood. “My husband told me not to be a crazy ex-girlfriend about it and stalk them…I can’t help it!  She deserves the best life ever!”

Carrie Underwood isn’t the first celebrity who’s made it known that there is a soft spot in her heart for dogs; Selena Gomez changed the life of a puppy in need by rescuing him from Winnipeg, animal rescue D’Arcy’s A.R.C. in October 2011.